Want a Prompt Global Strike? Then you better want to dump nukes 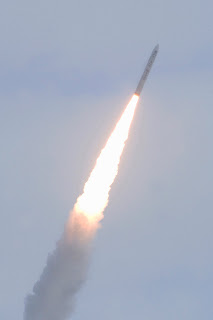 While all eyes were on the highly-publicized, well-covered launch of the somehow still super-secret X37B military space shuttle from Florida, an important launch in California went virtually unnoticed.

The hypersonic delivery system for the proposed Conventional Prompt Global Strike system launched atop a Minotaur IV rocket from Vandenberg Air Force Base in California. The Defense Advanced Projects Research Agency (DARPA) Falcon Hypersonic Technology Vehicle 2 was to travel 4,100 miles and crash in the South Pacific. Things did not go as planned. Controllers lost contact with the vehicle a few minutes after launch. Another launch is planned, but the failure highlights the technical difficulties inherent in the CPGS program.

And yet those aren’t the only difficulties. As several observers have stated over the last few days, the CPGS program could prove technically difficult and costly to implement, could spark a nuclear response from twitchy nuclear-armed nations if used, and would unnecessarily replace already deployed weapons and delivery systems. These observations are duly noted.

But the detractors of the CPGS forget one thing. Its creation could be used as a spur to complete then elimination of the US nuclear arsenal. Naysayers of the weapon, such as Joseph Cirincione of the Ploughshares Fund, are right to point out that nuclear-armed nations will not be able to tell between a nuclear and non-nuclear weapon launch and could respond with nuclear weapons, thus sparking a nuclear conflict.

Therefore, if the Obama Administration wants these weapons, their development should be tied to the reduction of nuclear weapons and their deployment tied to the elimination of the US nuclear arsenal. Obama has said the move to develop the CPGS program was based on a desire to “move towards less emphasis on nuclear weapons,” but that is not good enough.

Supporters of the CPGS need to take responsibility for the potential consequences of the use of their weapon. The only way it could be used responsibly is if nobody need fear a nuclear attack by the United States. That can only happen if the United States has no nuclear weapons.

If supporters of the CPGS really want the system, they should also be pushing for the total elimination of the US nuclear arsenal. Any other position will reveal their passion for the CPGS as costly, irresponsible money-grubbing.

Supporters of the CPGS, the next move is yours.

Posted by Mackinder at 4:47 PM