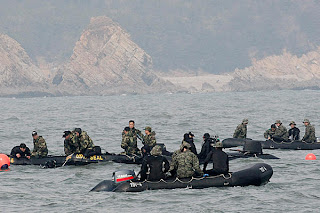 Saturday marked 8 days following the mysterious sinking of the South Korean naval vessel Cheonan. It also marked the first day that rescuers discovered one of the 46 missing servicemen was recovered. After the body of Senior Chief Petty Officer Nam Ki-hoon was found yesterday, families of the remaining 45 missing sailors urged the rescue effort to be stopped in order to prevent risks to divers and rescuers - particularly after the deaths of a South Korean navy diver and 2 sailors whose private fishing boat collided with a freighter in their rescue efforts (while seven remain missing).
The South Koreans, along with help from the US Navy, will now work to recover the 1,200 ton Cheonan in order to investigate the cause of its demise. However, despite the clearest weather above the water in days, the murky underwater conditions are likely to delay the investigative work even more.
As we wait for the ship's recovery (likely to take weeks) and Pyongyang remains silent, speculations will continue to fly. The South Korean government quickly dismissed the cause of the explosion as internal; a human torpedo seems highly unlikely as the ship was in motion; and if a North Korean mine indeed caused the explosion, it must have a mind its in order to have found the Cheonan (no mines from the Korean War have been found since 1984). With an explosion powerful enough to halve the 1200-ton vessel, the source must have been substantial considering the strength of the relatively modern ship.
South Korea has drawn criticism on various fronts: preventing the Choenan survivors from speaking to the press, implying that North Korea's culpability without firm evidence, and taking 8 days to reach the sailors who sunk with the ship. Meanwhile, North Korea has accused South Korean troops of firing toward its border on the eastern part of the demilitarized zone. Though this is most likely an attempt to take notice away from the Cheonan, South Korean officials (along with the rest of the world) should be careful in prematurely placing the blame on North Korea. Though the two countries are still technically "at war," the United States military would be extremely strained to be heavily involved in a third major conflict. Whatever the outcome, the two Koreas would both benefit in settling the decades-long disputed boundary, particularly in the Yellow Sea.
Posted by quotha at 2:00 PM