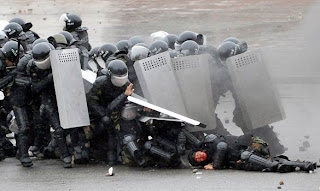 How do the recent events in Kyrgyzstan relate to defense statecraft? The U.S. has an airbase in Manas, near the capital, that has become an important transit point for cargo and personnel headed to Afghanistan. Last month alone about 50,000 troops passed through the base. Brigadier General Mike Holmes discussed the importance of Manas to the war effort last week in his remarks at the University of Kentucky. Although the majority of cargo going to Afghanistan travels overland through Pakistan or Central Asia, the majority of personnel go through Manas.

Last year Russia announced over 2 billion in aid for Kyrgyzstan, in a deal where Kyrgyz President Bakiyev promised to close the U.S. air base. But Bakiyev used that deal as an opportunity to renegotiate the lease, allowing the U.S. to stay by calling it a “transit center” and tripling the lease. The Kremlin may see his overthrow as an opportunity to force the U.S. out. A senior Russian official has said that Moscow will urge the new leadership to shut the U.S. air base at Manas, commenting that there should only be one base in Kyrgyzstan-the Russian one.

The acting Kyrgyz leader, Roza Otunbayeva, stated that the new leadership would make a decision in the best interest of Kyrgyzstan but that the treaty would be upheld. However, another opposition leader has said that due to Russia’s support of the coup the U.S. presence in Kyrgyzstan will be shortened. (Michael McFaul, Obama’s advisor on Russia, has denied that opposition’s seizure of power was a Russian-backed coup.)

The ongoing unrest, and especially a closure, could possibly delay the additional troops headed to Afghanistan as part of President Obama’s announced surge there. Manas has provided a valuable alternative to overland transit across Pakistan. Air Force Chief of Staff Norton Schwartz has said that "If we had to fall back to other locations, we could do that. We have a plan, we have a back-up. It's harder. It's more expensive, it's more ... intensive." The situation definitely complicates the logistics of carrying out a war in Afghanistan and gives the U.S. yet another thing to worry about in Central Asia.

Posted by Dave and Rashelle at 7:18 PM