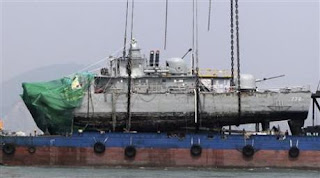 Yesterday, South Korea finally cited an external explosion as the likely cause of the sinking of the navy patrol ship Cheonan. North Korea responded by making its first statement on the incident, saying that it was not responsible. The North claimed that the South is plotting against it in order to increase sanctions, justify its hostile policies, and bolster domestic support before local elections in June. This is of course just typical North Korean bloviating. South Korea’s president, Lee Myung-bak, has relatively high ratings and his party controls parliament. The South does not need any additional reason to maintain its current policies vis-à-vis the North, which is already under heavy multilateral sanctions.

In actuality South Korea has been anything but confrontational, seeming to slow-play the entire investigation. Did South Korea really need 3 weeks to figure out that the explosion was external? And Defense Minister, Kim Tae Young, said that they “will respond in a very clear and firm manner” once they figure out what caused the explosion. However, Young did not specifically identify North Korea as responsible and those “get-tough” type comments are likely due to the increasing domestic criticism of the investigation. Official statements have been cautious, although the South Korean media has been suspecting North Korea since there are no other likely causes.

It is readily apparent that South Korea is not eager to get involved with the North militarily. Military escalation would likely seriously disrupt South Korea’s economy and daily life, something that the government does not want to happen on its watch. Because South Korea loses no matter what they do they are likely to downplay the incident and try to get back to life as usual. Perhaps they will conclude that there is not irrefutable evidence that North Korea caused the explosion or they will somehow find an excuse to not hold the North definitively responsible. There were hints of this approach in the Defense Minister’s comments when he said the investigation may take years as authorities will need to recover pieces of any potential torpedo or mine and determine whether the North had such weapons. Don’t expect a war on the Korean Peninsula anytime soon.
Posted by Dave and Rashelle at 1:00 PM