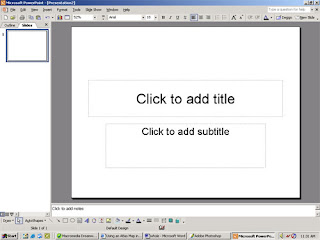 Everybody seems to agree on this one thing: Microsoft’s PowerPoint presentation software dumbs down military briefings and its heavy use takes up a ridiculous amount of time. Apparently everyone from platoon leaders to generals labors for hours to crank out slide after slide of presentation fodder.

But while there are plenty of voices decrying PowerPoint, nobody is very good at coming up with a replacement. The latest trigger for a round of PowerPoint hatred is this New York Times piece, published April 27. It details the overuse of the software, and quotes numerous military men expressing their dependence and hatred of PowerPoint:

Commanders say that behind all the PowerPoint jokes are serious concerns that the program stifles discussion, critical thinking and thoughtful decision-making. Not least, it ties up junior officers — referred to as PowerPoint Rangers — in the daily preparation of slides, be it for a Joint Staff meeting in Washington or for a platoon leader’s pre-mission combat briefing in a remote pocket of Afghanistan.

Yes, PowerPoint is bad. It stifles creative thinking and encourages simplistic answers to sometimes tortuously difficult problems. But how do you replace it? According to the NYT piece, Gen. H.R. McMaster banned PowerPoint from his command while taking part in the Iraq invasion. Spencer Ackerman has suggested cloud computing, i.e. Google Docs. But both answers are reactive – they don’t provide the same utility of PowerPoint (for the military, or business). Frankly, nothing does.

This isn’t the first time those in the military have complained about PowerPoint. Gen. Michael Flynn’s indictment of intelligence work in Afghanistan (released earlier this year) came down hard on the use of PowerPoint. As Matt Yglesias pointed out then, it’s not a new problem or a rare one. Now, months later, here we go again with another round of complaints and no solutions, although plenty of parodies.

As the Atlantic Wire notices, this kind of standardized, simplistic way of seeing the world is growing in the American political culture. Also, it’s not a problem created by technology. This way of thinking is entrenched in who we are.

This is not the first time someone’s written an article detailing complaints about PowerPoint. Yet because the military and the press have no substantive solutions, PowerPoint will keep getting used at Pentagon desks and in foxholes, and journalists will keep cranking out complaint-filled articles about how ridiculous it all is.

Way to solve the problem.

I’ve got a solution of last resort: Why doesn’t DARPA do something about this? Or perhaps I should pull out a tired cliché and demand a Manhattan Project-type effort to replace PowerPoint…

Posted by Mackinder at 8:50 PM