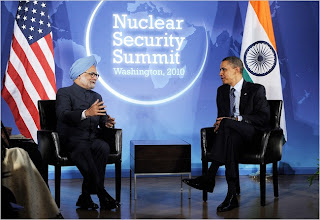 Starting today (and through Tuesday), leaders of 47 nations - including those from China, India and Pakistan but excluding those from Israel and Iran - descend on Washington, which marks the first such occasion in the capital since the late 1940s. The expressed goal of the Nuclear Security Summit is to seek "ways to better secure existing supplies of bomb-usable plutonium and highly enriched uranium." Of course this event will follow the release of the 2010 NPR and last Thursday's START treaty with Russia, all part of the Obama administration's long-term goal of a nuclear-free world. The BBC also suggests,

all three events are aimed strengthening Mr Obama's hand as heads into step four: the review of the Nuclear Non-Proliferation Treat (NPT) scheduled for next month in New York.

As with the NPR and START treaty, this event won't occur without criticism. Though I don't think certain criticism has anything to offer for discussions on US defense posture (see Palin's schoolyard analogy), some significant shortcomings of the summit are worth notice and consideration. First is the "wicked" problem that both non-NPT members Pakistan and India are either in the process of or planning on increasing production of weapons-grade fuel. This arms race is enabled partially by a Bush-era agreement with India that implements necessary technology for nuclear power plants, thereby freeing up older nuclear facilities for creating next generation nuclear weapons. Meanwhile, Pakistan is poised to expand its weapons-grade fuel as a deterrent; yet at the same time the Taliban and Al Qaeda inhabit near-lawless swaths of Pakistani territory - an obvious increased risk to the stated goal of the summit.
Second, Israeli PM Netanyahu has backed out of the summit only a few days before it is to begin (sending instead deputy PM Meridor). Following US-Israeli tensions regarding Israeli behavior prior to the Israel-Palestine peace process, this move is representative of Isreal's focus on protecting its weapons program in the face of a possible nuclear Iran. Neither confirming nor denying possessing nuclear weapons, Netanyahu decided not to attend after learning that Egypt and Turkey would question Israel's nuclear program. Planning on attending a nuclear summit, Netanyahu must have expected questions about its own program. In any case, Netanyahu's absence could further strain relations with the US, as well as diminish the possibility of encouraging sanctions on Iran at the summit.
Iran, on the other hand, won't be in attendance because it wasn't invited. Instead, as it announced on April 4th, Iran will hold a nuclear disarmament conference on April 17th with 60 countries expected in attendance. Fitting nicely into the Iranian narrative that its nuclear ambitions are for civilian use only, this conference will undoubtedly provide another platform for anti-Israeli remarks (while Israel will miss its chance in Washington) and to try to dissuade further sanctions.
Although Obama cannot possibly tackle these and other pressing issues at the nuclear summit over the next two days - and doesn't intend to - they signal that we have definitely not heard the last of international nuclear woes. Even if the world is successful in preventing "loose" nuclear material from falling in the hands of non-state actors, it is far from becoming nuclear free. As a final note, as Dr. Farley mentioned, perhaps the only way for the US (and thus the world) to take concrete steps toward this goal is to look for changes inward first rather than outward.
Posted by quotha at 10:37 PM