The RRW is dead, long live the RRW! 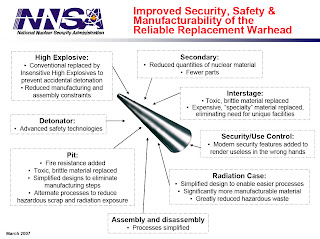 Congress cut funding for the Reliable Replacement Warhead program in 2008 and the Obama Administration called the program “dead” in 2009. Yet Obama’s recently-revealed Nuclear Posture Review opens a loophole to a warhead replacement option, although it likely wouldn’t gain the scope or name of the RRW program.

Here’s the replacement language in the NPR, courtesy of Clark Murdock of CSIS:

While stating that U.S. would use only “previously tested designs” in their Life Extension Programs for each nuclear weapons (the cancelled RRW program used “new design” warheads for maintaining the stockpile), the 2010 NPR retained the “replacement option,” in addition to refurbishment and re-use, for maintain the reliability of a particular warhead, but said it was the least preferable option and exercising it would require both Presidential authorization and Congressional approval.

Again, this would appear to keep RRW effectively in its grave while still allowing for some sort of replacement option as an augmentation to the Life Extension Programs. The replacement option will be reviewed on a weapon-by-weapon basis, and it will fall below reuse and refurbishment as modernization option.

Not so fast. Murdock fails to mention something: NPR clearly states “no new warheads,” but then immediately follows that sentence by stating that the replacement option will use only warheads “based on previously tested designs.”

Boom. It’s a key loophole, and one foreseen by the Federation of American Scientists. What exactly does “new” mean, if a new design could be simply viewed as a variant of an existing, well-tested design?

In fact, Obama's NPR makes it possible for the one design that was approved under the now-dead "RRW" program to be utilized in the future, provided that they don't enhance the productivity of a weapon.

The design to which Ambinder refers is likely the SKUA-9, the base model for the LLNL’s RRW winning WR-1 warhead design. The SKUA-9 was thoroughly tested prior to the 1992 testing moratorium, but was never actually deployed in the nuclear force. It is possible to argue that this warhead design is not new, and doesn’t need additional testing. That makes it a newly-respectable candidate for the replacement option.

Republican reaction to the NPR is decidedly negative, with most commentators on the right decrying Obama’s decision as a failure to properly modernize the nuclear force. Such statements might be politically effective but the overlook the “previously tested designs” loophole.

With the influx of additional funding for the weapons laboratories, now would be a good time for the Republicans to game plan how they can use the hole in the NPR to accomplish what they want.

The way is open. Now it will be interesting to see if Defense Secretary Robert Gates – an old RRW supporter – and the Republicans in Congress can take advantage of those pathways to piece together an RRW-like program, perhaps as quid pro quo for ratification of the Comprehensive Test Ban Treaty.

Posted by Mackinder at 2:24 PM