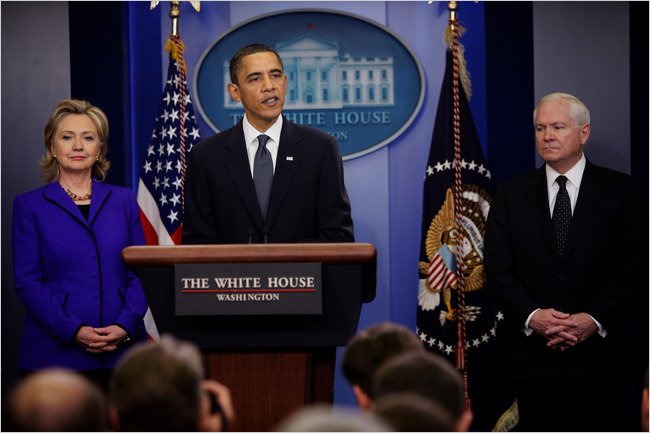 This past week saw President Obama making good on a campaign promise and years of advocacy for nuclear weapons reductions (dating back to his time at Columbia) with the signing of a new START treaty with Russia. The first major arms control treaty in twenty years between the former Cold War foes, the treaty reduces active strategic weapons to 1,550 (down 30% from the previous START) and limits delivery vehicles from ICBMs to long-range bombers to 800.

This sounds great, even if the reductions aren’t as great as one might have hoped. The greatest significance of this treaty is not the actual numbers, but the fact it was signed at all. It suggests that not all of Obama’s efforts to “reset” our relationship with Russia have failed. Apparently, negotiations on the treaty became extremely tense several times, with Russian president Medvedev threatening to walk away on numerous occasions. That Obama managed to hold his feet to the fire and achieve a viable treaty that has been welcomed by the international community is just another of the major political successes he has scored in the past couple of weeks.

Unfortunately, the new START may be valueless. As with healthcare, the Republicans—likely whipped up in partisan fury—are promising to defeat ratification of the treaty unless there is some sign Obama is willing to modernize the US ICBM force and stand by missile defense. Ratification of treaties requires a two-thirds majority, so even if the Democrats are capable of standing together (for once), they will need seven members of the GOP to come across the aisle to achieve the needed 67 votes. The way things are going in Washington this treaty will never see the light of day.

Worse still is the fact that the treaty in no way addresses the countries’ immense stockpiles. By dealing with only active and deployed weapons and delivery vehicles, there is no requirement for an actual reduction in weapons. The number of nuclear weapons in the world will still be over 20,000, to no purpose. The White House also admits that the treaty in no way addresses testing of either weapons or delivery vehicles, and because the US has maintained its position supporting missile defense, there is likely to be a continuing offensive and defensive arms race well into the future.

The gloss of US-Russia cooperation and mutual monitoring is nice, but beneath the surface this new START is toothless and likely DOA. One can only hope it may be a START for something better.

Posted by RoareeTheLion at 4:35 PM

This sounds fantastic ! I honestly can’t wait I hope there isnt too much wait for it to be shown in the UK but the second it does you can count on me watching it.