Mine's Bigger Than Yours!!

With all our talk about strategic planning and war planning as well as the difficulties and even consequences that go along with them, one cannot ignore the war games going on in

India and Pakistan. War games mind you that are based on a war with each other! The games commencing this month and taking place close to the shared borders between the two adversaries. In such a situation, one begs to question whether or not such a show of force is really productive. The security dilemma it has the propensity to create is that of a threatening nature, that while enhancing their own security, at least in theory, they are posing such a display of force to the other side as to make them worry and respond in turn with heightened suspicion and advanced weaponry of their own.

The fact that the two sides "coincidentally" decided to have war games at the same time does not add to the comfort level. There is concern in Pakistan over India's Cold Start doctrine that supposedly enables India to respond quickly to any uprising from Pakistan. The doctrine itself though, rumor has it, is one that has not yet been developed enough to be effective, especially in an atmosphere where both adversaries have nuclear weapons. So why not alleviate some Pakistani concern by stating in some way that the doctrine has not matured into something operational and adequate? Well that would be showing weakness right? Or would it enhance security for India by giving Pakistan some added confidence? Its a double edged sword, once things have been put into play

taking them out of the game is very complicated. The actions of one directly effect the other. Allowing room for concern and massive changes in plans in response.

So in response, the war games are here! Pakistan has been shooting off fireworks (w 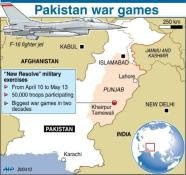 ell launching an assortment of bombs and missiles) for the masses and apparently its been quite a show. The games (video here) that started for Pakistan on April 10th are not due to end until May 13th and involve multiple levels and phases. That is a whole month of tactics and a whole lot of ammunition to play games with! Not to mention the 50,000 or so troops engaged, F16s and yes, tanks! The Pakistani operations, with names like New Resolve and Fresh Passion give of a flare of patriotism and well, new resolve. India even has a new airbase, and guess what guys...those of you who have now mastered the art of the M1 tank, well India's got'em too if you're interested!

Ultimately, the question is what really do these games achieve if they cause so much suspicion and animosity, though leaders on both sides denounce any intent to threaten, they only want to be prepared. Besides being a whose is bigger competition, would countries such as these be better off without such displays? I can see it working when one is substantially weaker than the other and a massive display of capabilities might work, although it is even questionable in that context, but with two relatively equal opponents? Further, what if someone didn't eat their Wheaties that morning and falls asleep at the gun and oops didn't mean to shoot that one over the border, hello real war goodbye games?