Maqdisi, a cleric living in Jordan, is one of the most well-known jihad theorists in the world. His teachings have influenced many of Islamic extremism’s most violent leaders, including Osama bin Laden. He has been arrested several times on suspicion of plotting terrorist attacks against American targets in Jordan.

Still, he gets no respect.

Young jihadists say that Maqdisi is going soft. Maqdisi defended himself by quoting –wait for it— West Point. A study by the Combating Terrorism Center at West Point concluded that he was extremely dangerous— “the most influential living jihadist,” even. Take that.

Maqdisi said that his critics within the jihad movement weren’t very bright, and he was surprised that “the enemies of religion read and understand us better than they do.”

Maqdisi represents the old-school branch of jihadism, defined by careful reading of previous jihad theorists that condone violence against emenies of Islam. The newer generation seems to be content with leaving these old scholars behind and interpreting the Koran as they see fit. As younger extremists become increasingly violent, they see the older scholars like Maqdisi as ineffective and submissive.

This kind of infighting probably won’t lead to the demise of radical Islam, as some have suggested, but it will lead to an even less centralized movement. Whether that will make it easier or more difficult to fight terrorism remains to be seen.

In the meantime, Maqdisi may want to look into another great American thinker: 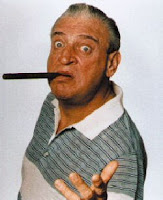 Posted by nondescript stranger at 9:59 PM