According to this week’s economist, Israel’s defense minister, Ehud Barak, has warned Prime Minister Binyamin Netanyahu not to confront the new Obama administration. Barak even pushed the prime minister to propose his own solution on peace with the Palestinians to Washington, including the acceptance of a Palestinian state.

That’s a big change for Netanyahu, who has historically opposed a two-state solution, and has been notoriously obstinate when it comes to Israeli concessions to the Palestinians. 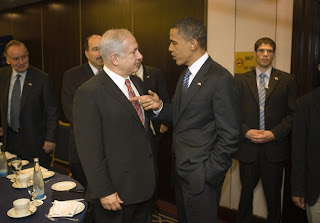 True, Obama and Netanyahu don’t have a whole lot in common when it comes to foreign policy. Obama’s push for a better relationship with Iran—a central element to his foreign policy— certainly doesn’t sit well with the right-leaning prime minister. Netanyahu’s plan for “economic peace” with Palestine, while it’s a start, won’t be enough for Obama.

But are their differences enough to spark real anxiety in Israel?

Unquestionably, the United States holds more power in the relationship and Obama is less inclined to give into all of Israel’s whims than the previous administration. He is also more likely to push hard on key issues in the peace process.

Still, Obama has assured Netanyahu that the U.S. continues to see Israel as a strong ally and has shown no signs of reneging. Even if Obama wanted this to change, the domestic political pressure to support Israel is simply too strong to ignore.

Will Obama be able to convince Israel to stop settlements in Palestinian territories? Will Netanyahu bend to the “two-state solution” that Secretary Clinton says is inevitable? Maybe. But the overall dynamic of the U.S.-Israel relationship is unlikely to change dramatically.
Posted by nondescript stranger at 12:57 PM