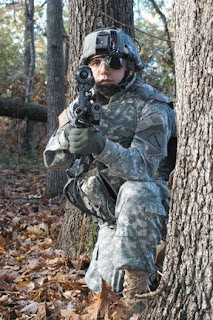 In January, statistics were released that the suicide rate in the Army has now surpassed that of civilian life. Approximately 20 soldiers out of 100,000 have taken their life in the last year as opposed to 19 civilians out of 100,000.  Considering that this is the fourth year in a row that the Army suicide rate has risen, it does let us expect that the numbers will continue to rise in the coming years.
There seems to be a fairly even distribution between suicides that occurred during deployments, after deployments and among those never before deployed, such as the cases at West Point.  Long, recurring deployments are causing more divorces and family stress that soldiers have trouble coping with.  After they return, many have trouble adapting back into the life of a non-combat zone.  Sleeping with your rifle within reach, coming under enemy fire and experiencing a high stress level due to the constant change between boredom at the FOB and a strong adrenaline rush on missions for over a year can change a soldier's attitude and perceptions.  Non-detected brain injuries and cases of PTSD are also a leading cause for suicide after soldiers return. Some soldiers try to cope with changes through substance abuse, but that only causes further problems with themselves and the people in their lives.
Sure, there is no simple solution to this problem. But what has the military been doing the last seven years?  The Army says it started hiring more general practitioners and mental health care specialists and began work on a five-year research project to identify the causes of suicide.  And, to its credit, it seems to have stepped up its effort at suicide prevention projects, since you hear references to hotlines and information programs on the Armed Forces Network these days.
Yet, I think that a primary problem is that the warrior culture of the Army impedes a lot of these efforts.  A good soldier is strong and self-sufficiently defends the interests of his country.  The first sign of weakness means that he is incapable of fulfilling his perceived duty and subject to a potential loss of respect from peers and subordinates.  There is a stigma associated with mental weakness and it will also be forever captured in a soldier's medical file. For many, the Army is their life and they do not have much to return to in a civilian world, if their families are torn apart and mental weakness keeps them from holding a steady job.
And yes, these people chose this profession willingly and for a reason, but that especially should make the military more responsive to their problems.  Veteran's health care also needs to be improved. Waiting 3 months for an appointment and driving 300 miles to the nearest VA hospital projects an image that veterans have been discarded by the government. While the Army's health care is not bad by all means, an improved health care system geared more towards the individual and especially better post-deployment care would demonstrate professionalism and concern for the Army's employees and also potentially help attract more soldiers and better doctors. But with the shift of more troops to remote areas in Afghanistan, a new problem seems to be a lack of access to deployed soldiers by medical personnel. Thus, it would be no surprise to see suicide rates rise again next year...
Posted by Thomas Hobbes at 9:04 AM