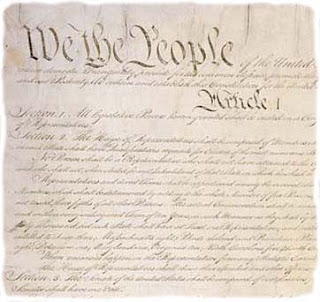 I found it very interesting and was actually a little excited when I found out the United States had a real pirate in its custody. I’d say it has been quite a long time since the U.S. will actually put a pirate on trial so I found myself wondering what exactly they would do. I began thinking about the U.S. Constitution and how piracy is addressed in the document. I first thought the policy against piracy was to hang pirates, but after further research it seems there is something that might actually be more applicable to combating today’s piracy problem.

Turns out that in the Constitution, the Legislative Branch has the power to “grant letters of marque and reprisal” which allow privately owned ships to search and even seize a violator of international law, in this case pirates. With this letter, the private party can go beyond the border to raid and capture the enemy vessle. However, in order to maintain control, the privately owned ship is under the authority of Congress.

Letters of Maruqe and Reprisal may seem far-fetched but after the seizing of the American ship this month, I believe they are something that should be considered. This modern-day piracy is difficult to fight militarily especially since the U.S. army is actively engaged in other areas of the world. By giving the right to privateers, under U.S. authority, we may be leaning towards a solution for fighting piracy off the horn of Africa.

As for the pirate in U.S. custody now, I don’t know…maybe make him walk a plank.
Posted by Athena at 1:15 PM

Why would the privateers want to do it? Back in the day, privateers got to keep all the loot from the ships they captured. They wouldn't really get much from the Somali pirates...