The 2nd Amendment, Militias, and My Own Excellent Adventure 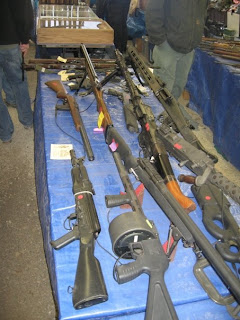 If you got the bills, this gun broker's got the deals. 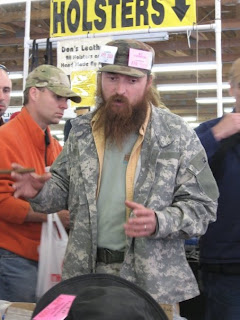 No, that isn't UBL.  He's the guy that is ready when the wolf howls at the door!
Last Friday I was unable to attend the field trip to Wright-Patterson AFB because of a class scheduling issue.  However, on Saturday I went on my own adventure to the semi-annual Knob Creek Maching Gun Shoot in West Point, Kentucky.  Although it might blow my cover to blog about my adventure after talking to several of you about it, I feel that it is only appropriate after what I saw there.
Simply put, private individuals in this country have the ability to own massive amounts of individual firepower.  So much so, in fact, that I believe private ownership of heavy machine guns, field artillary pieces, sub-machine guns, flame throwers, and explosives deserves at least a fair mention in our Defense Statecraft class.
.50 Cal. Sniper Rifle, $7,800 - Shells, $4 apiece - Good 'Ole Boy shooting it, Priceless
I should start by saying that I fully support the 2nd Amendment and people's right to own these weapons.  However, I personally have NO idea why a person would want to own a .50 Cal. machine gun, sniper rifle, or mini-gun.  Obviously, it is super entertaining to blow stuff up with them, but it is also super expensive entertainment and out of my price range.  This point of this post isn't to argue about the 2nd Amendment though.
The point is that all of the individuals owning these weapons need a creative outlet other than the occassion gathering of like-minded individuals.  Some might say, "Well, that's what the National Guard is for," or "They should be in the Reserves."  It is highly likely that most of the individuals at the Knob Creek shoot were/are in the military in some form or another, and that makes them even more valuable because the Military has already invested time and money in them.  Thus, we should continue to reap the benefits of that investment by giving them an alterative outlet besides for the Reserve and Guard.
After browsing through the Beyond Goldwater-Nichols - Phase III (dealing specifically with the Guard and Reserve) it is clear that the objective of these military components has shifted dramatically away from their origins since 9/11 and are now critical in foreign operations.  I recommend that DoD begin exploring options about how to harness the power of individuals with the type of fire power displayed at Knob Creek in order to create structures for Homeland Defense and Civil Security Forces.
This undoubtedly sounds crazy on its face, and I have no idea what this organization would look like.  I believe though that it should serve as a "step-down" organization between the National Guard, the Reserve, and the civilian population.  Individuals that have served in the Armed Forces could use it, and their love for high-powered, expensive weaponry to protect our soil.  And those individuals that haven't served, and do not want to fight war abroad, but still love guns and country could also use it as an an outlet.  It would also be a great way to keep track of them, because, trust me, some of them are absolutely out of their minds.
Here's to the the return of the well regulated militia.
Posted by David Riley at 10:01 PM

Some more "fun" pictures from the event:

How did you decide what to wear?

Wear? You mean what to wear to the event? Well, I decided not to shave for a few days, broke out some old work jeans, by favorite flannel shirt, and my work boots. I fit right in.

And, I found the article posted above slightly skewed. Sure, there were lots of extreme right-wingers there, but overall, I really got the feel that it was a balanced crowd. Although there wasn't a huge minority presence there, I still saw several minority groups and never felt that they were being excluded. They loved shooting machine guns just as much as the next guy or gal.