What makes a military, or a military operation, effective? While it is difficult to concisely say, or narrow it down to one deciding factor, budget, training, culture, leadership, morale, technology, and more all play a role. Recognizing the complexity and interconnectedness of these factors can help in the overall evaluation of the quality and effectiveness of a military.

However, each nation has a unique way of creating a military and then training, equipping, and using it. So given the diversity between one nation’s military and another nation’s military, what happens when militaries work together? Not just in the sense of conducting joint exercises or training, but rather, what happens when troops from different countries come together to collectively fight a war?

For a recent example: NATO. After the September 11 attack on the United States, the United Nations Security Council created the International Security Assistance Force (ISAF) and eventually NATO was charged with supervising a coalition of troops ultimately assembled from 49 contributing countries. The countries represented were as varied as El Salvador, Germany, Montenegro, Tonga, and the United States.

How effective is a transnational coalition though? Are so many diverse countries able to work together and create meaningful progress? In 2013, reports that Taliban attacks in Afghanistan had decreased in 2012 were proven to be false, leading some to wonder if anything productive and long-lasting is being accomplished by the NATO troops in Afghanistan. The length of the war in Afghanistan is also troubling to many. Additionally, despite NATO’s multinational factor, that has not helped sway global public opinion in support of the war in Afghanistan. The Pew Global Attitudes Project conducted a survey in which the majority of respondents in 32 out of 47 countries thought all foreign troops should leave Afghanistan. Even countries in NATO who had troops in Afghanistan wanted the troops to leave. The war has also grown increasingly unpopular in America and many Americans view the war in Afghanistan as unsuccessful overall. If NATO is truly effective, why is the war so drawn out, why is the Taliban still thriving, and why do most people want the troops to leave?

Yet despite what many would call a futile attempt in regards to the war in Afghanistan, others cite Libya as a recent NATO success story. In 2011, NATO intervened in Libya and President Obama commented on the extraordinary effectiveness of NATO and how closely American and French soldiers were able to work together – even to the extent of having Americans pilot French fighter jets.

So while the merits and likability of NATO are certainly up for debate, perhaps what is most pertinent to this discussion is the question: just how effective can NATO potentially be, given the fact that it is a transnational military force?

Well, in order to be effective, troops need to have some amount of mutual understanding. For this reason, shortly after its creation in 1949, NATO realized the importance of standardizing and it formed the Military Agency for Standardization in 1951.  This later merged with the Office of NATO Standardization, which eventually morphed into the NATO Standardization Agency (NSA). Through this agency, NATO has implemented a number of Standardization Agreements (STANAG) to help coordinate the member nations’ militaries. These STANAGs allow countries to ratify agreements which establish common ground and synchronize operational procedures, technology, equipment, and so on. From aircraft marshalling signals, to doctrine for countering improvised explosive devices, to a glossary of abbreviations, to doctrine for special operations, the STANAGs give all NATO nations a universal framework that if jointly executed, creates a more effective multinational military. Instead of each country trying to accomplish things its own way, finding agreement and commonality with each other will enable more unity, and hence, a greater chance of effectively working together.

NATO’s STANAGs accounts for significant political, strategic, operational, and tactical cooperation that enables NATO to more effectively conduct the operations that it is involved in. But is it enough? Can STANAGs teach initiative, create morale, overlook social differences, and compel information sharing? Can unit cohesion and trust be created in a multinational force? Initial thoughts indicate that NATO has some of the ingredients needed for success. While the STANAGs do not help with the global perception of international war, and while they do not seem to strongly deal with all areas and considerations, they are a step towards ensuring NATO’s military capability is as efficient as possible by addressing issues that could hamper its effectiveness as a military force.
Posted by Anonymous at 10:28 AM No comments:

Star Wars, Biddle, and the USMC

The Star Wars Movie Series is one of the classics in the science fiction genre.  In the original trilogy (movies 3-6, with release dated beginning in 1977), a group of ideological zealots who call themselves Rebels rise up against a technologically and numerically superpower aptly named the Empire.  However popular the Star Wars movies are to movie audiences, they can also function as an alternative visual guideline which reaffirms the relative value of force employment in a modern system similar to that explained in Stephen Biddle's Military Power: Explaining Victory and Defeat in Modern Battle.

Overview
In the Star Wars movies, both sides essentially typify the combating theories present in Biddle's work.  The Empire follows the Old Theory models, as it has an incredible numerical preponderance over any conceivable adversary, and enjoys an enormous technological edge.  It also has an enormous air force and a moon-sized space station that can destroy planets, aptly named the "Death Star".

The Rebel extremists are outnumbered and technologically outlcassed.  The ground troops use World War 1 style trenches and fixed emplacements (which get destroyed quickly):

And pack mules with people on them:

Unsurprisingly, they rely quite heavily on their outnumbered air and space forces.

Why it relates to Biddle
The two sides here are easily analogous to Biddle's "Old Theories" and "New Theory."  The "Old Theories" that relate to victory and defeat in battle tend to overemphasize the roles played by numeric preponderance and technological superiority.  This ignores the dichotomy inherent in the "quality vs. quantity" argument, as there are tradeoffs that must be made in the procurement process.  Just to make things interesting, the Empire figured out a way to solve the apparent inconsistencies between quality and quantity, with a "get both" solution; after all, a military craft the size of a Galilean moon would certainly require both inordinate amounts of manpower and technological prowess.

The "Old Theory"s reliance on technology and numerical preponderance to explain superiority in battle de-emphasizes the role of tactics and force employment on the tactical level, instead subscribing to the Dyadic Theory of technology (wherein the side with the better technology is better off and will likely win).  This is most clearly seen during various ground battle sequences throughout the movies.  In fact, the only real use of their ground technology involves lumbering slowly towards the enemy in a frontal assault using mechanized troops that have all the grace and maneuverability of elephants:

The "New Theory" places far more emphasis on the role of Force Employment--a theory to which the Rebels certainly seem to ascribe.  The Rebels lost the winter battle of Hoth (pictured above), as they did not make use of Biddle's recommended defensive measures--hiding their defenses, using interlocking fields of fire, and defense in depth.  They did at least subscribe to the concepts of cover and concealment, dispersion, small-unit independent maneuver,  and combined-arms integration--which would have been great if they were on the offensive.  They did employ all of the above in their ground battle of the 3rd movie of the original trilogy (number 6, when fighting offensively on a forested moon around Endor), and won decisively.

The Air and Space forces of the two sides show an even larger imbalance than those on the ground, and showcase even more why force employment matters.  As stated previously, the Empire has a space station the size of a small planet, that can blow up bigger planets.  The Rebels have a relatively small space flotilla with a number of small fighters.  The biggest thing the Rebels have that the Empire lacks is tactics and a thorough understanding of force employment.  Despite all the wonders of technology and obvious intergalactic numerical preponderance, the Empire still left a direct port from the exterior straight to some style of nuclear-powered core--a defect around which the Rebels planned an entire offensive operation.

This is an oversight that the IAF would have loved during Operation Opera in 1981, when they bombed Iraq's nuclear reactor.  In any event, the outcomes were the same: 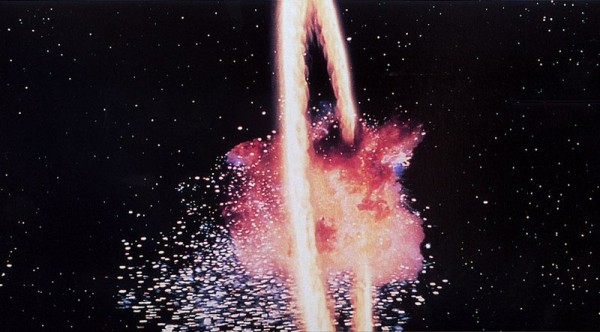 Why does it matter?
The inevitable question.  Why go through a science fiction movie to attempt to explain military power theories of the real world?  Simple--an outgunned, out-manned force that is technologically outmatched can still fight and win if their underlying theories are correct.  The most obvious set of examples of such occurrences come from any number of Arab/Israeli conflicts from the 20th century, and a number of delightful summaries can be found in Kenneth M. Pollack's book Arabs at War: Military Effectiveness, 1948-1991.  Contained within the first 150 or so pages are a number of exposes regarding the performances of the Egyptian military in a number of wars against Israel during the latter half of the 20th century.  In a number of the conflicts, the Egyptian military possessed a preponderance of then-modern Soviet equipment that was technologically superior to the motley assortment possessed by the Israelis. However, the Israelis consistently beat back their Egyptian foes, in fight of odds that would be thought suicidal to any "Old Theory" adherents.

How were the Israelis able to consistently claim victory?  According to Biddle, any "New Theory" modern-system military will consistently come out victorious when faced up against a non-modern-system adversary, even if that adversary possesses the technological or numeric edge.  This plays out in any number of wars the Israelis have fought against their admittedly underwhelming neighbors.

Famously, this lop-sided match between the modern system and non-modern system played out in Gulf War 1 and Gulf War 2, prompting many to speculate that it was the cusp of a revolution in military affairs.  Biddle implies that the technological advancement demonstrated in the Gulf Wars is merely a result of the modern system's merging with the latest technology, rather than a full-scale revolution.  In Gulf War 1 there were USMC tankers plodding around in outdated M60 tanks rather than the newest M1 Abrams.  These armored columns were technologically outdated according to "Old Theory" adherents, and still dominated the battlefield because they had a better system of force employment.

While an reactive-armor plated M60 astride a dirt mound might not be as theatrically pleasing as snowbound pack mules, anachronistic trench warfare, and space battles culminating in an exploding moon-sized object, when viewed in the framework of Biddle's theories on Military Power, they can all do justice in showcasing the versatility and "galactic" truth of the primacy of force employment in the modern system.
Posted by The Maid who sold her Farley at 7:40 PM 2 comments: