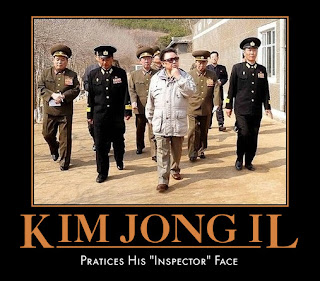 Scene: A single chair in a dark room eclipses the incandescence of a T.V. tuned to CNN. A diminutive dictator pouts from his perch on this chair; The newscaster is describing the events of the Summit of the Americas. The camera, zoomed in on a single tear upon the face of the leader, slowly panning out to show the jealousy upon the face of Kim Jong Ill, palpable in the soft glow of the T.V.

Admittedly, the actual events were most likely not so dramatic or emotional. But the picture of Obama and Chavez engaging in that forbidden act of shaking hands must have bugged Kim. North Korea has worked hard to gain the attention of a disapproving world through its testing of a ICBM... I'm sorry, I meant "through the launching of a completely legitimate satellite"... and suddenly the attention was back on Mr. Chavez.

Luckily, all it takes is a statement released by North Korea railing against the U.N. Security Council to get back into the international spotlight. In a statement that comes disturbingly close to resembling a rant of Red Skull, North Korea asserts that "the hostile forces are foolishly scheming to suffocate the DPRK’s defence industry by physical methods". As usual, this is accompanied by a threat to defend North Korean interests through any means necessary.

The question of how to respond has been met by many suggestions from various sources but the bottom line is the only thing that North Korea has to threaten anybody is the nuclear program and the perrenially-hostage city of Seoul. The actual use of a nuclear weapon against another country or the destruction of Seoul would most certainly be negative and up to a point these threats must be taken seriously. After that point though the reality of the situation must take over. In spite of all of the belligerent talk and posturing from North Korea, the prospect of a unified military response from the world community means that any aggressive actions from the North Korean military would be suicidal. And the leadership must realize this; Despite all of the characterizations of lil' Kim as an irrational headcase it is clear that he enjoys his position and wants to preserve it. So he will continue to thumb his nose at the world and wave his prized nuclear program, but in the end it is most likely not a threat.

What does this mean for the U.S. and the rest of the world? Obviously we do not want to make the North Koreans feel as if they have nothing to lose. There is a danger in hinting that the North Korean regime is being targeted for intervention, but so long as they feel that noone is acting to disrupt their status quo the worst we can realistically expect is a continutation of the missile/satellite tests and more melodramatic statements from the North Korean regime. Token attention from the U.S. and other members of the international community should be paid, but the position from which NK is seeking to bargain is not such that the world has to bend to their will. Whether you view it as stalling for an inevitable regime change or just training North Korea to play by the rules, by overhyping the statements and actions of North Korea we only play into their relatively weak hand.
Posted by Fork at 11:29 PM