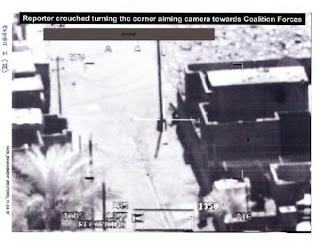 The gun-camera video of the 2007 killing of two Reuters journalists in Iraq by US Apache helicopters has now been viewed and reviewed ad nauseam (although worthily by colleague Cruiseologist, below).

WikiLeaks – the Sweden-based organization that recently released the footage of the killings – claims to have done so under the journalistic prerogative to tell the truth, to bust through the military’s supposed cover-up of the situation. But WikiLeaks chose to deceptively frame the video with loaded words and an emotional preamble, selectively tag cameras but not weapons in the video, and allow the reductive power of the camera to tell an emotional but inaccurate story.

By doing so, it degraded its claim to be an objective journalistic organization and makes itself look hypocritical for accusing the US military of any sort of cover up and spin. WikiLeaks could have simply released the full footage and let others do the analysis, or it could have released the video as part of a larger package that unveiled the context of the situation. Wikileaks recently added more information to its special “Collateral Murder” website home for the video, but its additional information is by turns helpful and highly misleading.

What WikiLeaks has done is not journalism but advocacy, and poor advocacy at that, since the video is clearly meant to drive viewers to feelings of frustration and outrage instead of a constructive response or a policy suggestion.

Here are some sources WikiLeaks could have included to provide context:

With added context, the situation gets more complex:

While this mass of information is a lot to digest, it provides crucial context which a good journalist would want to use to flesh out what happened in Baghdad that day. Yes, some of it was not released until after WikiLeaks released its video. But if that information was not available, that is all the more reason for WikiLeaks to simply release the full video without adornments and commentary or dig for more information.

WikiLeaks did not use such information. Instead, it went for the emotional cheap shot by front-loading the viewers video with hindsight knowledge and framing it as evidence of murder. Such poor journalism only clouds the discussion and hinders a discussion of the larger moral, ethical and military questions regarding this situation and the war. These are important questions and worth discussing. Instead, WikiLeaks triggered another round of emotional back-and-forth with few policy implications.

WikiLeaks should be shamed for misleading viewers of the video, showing great disrespect for the standards maintained by the journalists who died in the attack, and adding to the tragedy of the death of the innocent.

Posted by Mackinder at 5:19 PM