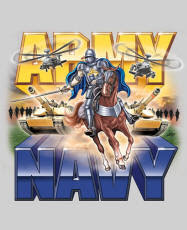 Military rivalry, and no not just the legendary football game nor the Hollywood favorite of military members throwing punches at each other in bars. It goes much deeper than that and gives rise to the question of whether or not we should be concerned. Does this rivalry create a security issue, does it cost the collective US military lives? In our recent discussion on military identity and brief history of origins, the fact that infighting has a basis is obvious in the conflict of overlap of responsibilities and blurred lines of branch command. What was not as clear was if this comes across just in mere bickering at the political level or if it transfers to ground combat, following orders, cutting corners and losing lives.

The most prevalent form of this rivalry is in play when branches compete for funding, for the biggest and brightest new tech toys and equipment. That sounds reasonable, there is always good to come from healthy competition, and that is what many decree this as, mostly harmless competitive spirit building. However, once you look back in history at the conflicts that raged within the military in WWII, before the development of the Joint Chiefs of staff and then jump forward to now, to the conflicts in Iraq and Afghanistan not all of which was harmful has been settled.

In WWII, to keep it simple, the main conflict arose between the Navy (then encompassing the Marines) and the Army as the two split and fought as they saw fit, the Navy basically island hoping and using the Marines as a land fighting force. This split lead to a Navy/Marine combination that lost more lives because the branches refused to coordinate strategy with the Army. Today that deterioration of distinction of the Marines as a security force for the Navy and as a deployable land force has obviously been blurred if not erased completely. The Navy has its own MA program and the Marines, though still tied to the Navy, are ideologically their own branch and seeking official recognition as so. Conflicts like this gave rise to the creation of the Joint Chiefs ans unified combatant commands, both of which were supposed to solve the problem but in some opinions, they have not.

The conflicts in Iraq and Afghanistan are said to be in need of a whole new level of branch cooperation from all, Navy, Army, Marines, and Air Force. Even today though, the different strategies used by the branches to accomplish the same task differ greatly and their drive to be the first and the fastest seem to sacrifice security. Be it the differences in testing for chemical weapons where the Army uses special vehicles and testing, the Marines carry pigeons and criticize the Army for spending too much or in the way each faction secures a building. As one description goes:
"when the Navy orders sailors to secure a building, it means to turn out the lights, lock the doors, and post a quarterdeck watch. When the Army orders a building secured it means to post an MP and make sure no one gets in without a special pass. When the Marines secure a building, they set up machine guns and bring in artillery support. When the Air Force is told to secure a building, it makes darn sure to get a two-year lease with an option to buy."
So who's being costly here? Most of these differences are chalked up to healthy competition, that keeps the military sharp but there are instances that one can use to question whether this competition leads to cutting corners and losing lives just to appear to be the first, the ones that make the difference. In one case a venture to secure Baghdad early on in Iraq lead to the hot pursuit of Marines through unsecured terrain by the urge of higher-ups for them to be the first into the city while the Army took a more tactical approach from the opposite direction. In the end, a decision by the field commander leading the Marines, to take a longer route in order to preserve lives that would have been, and some that had already been, unduly lost lead to him losing his job, one of the underlying reasons being perhaps that he just didn't make sure the Marines were the first. Now, facts are always up for interpretation, and usually we don't have the precise facts when it comes to maneuvers during war, but the possibility remains.

In a more direct approach, commanders from different branches openly criticize the tactics used, for example General Conway's critique of the Army and Air Force using air strikes against insurgents, saying that his Marines were not going to pursue such actions. Bidding for public support sure, but to what extent does this also show lack of a shared strategy within the military itself? Many aspects of this "dysfunctional" family, as said before, are chalked up to healthy competition. Still, some argue that by merging some aspects of the branches, much like the proposal to merge commands in 1946, the US would save money and end rivalry. Though this doesn't seem to be something that will happen in this lifetime, nor do I particularly advocate the merge, the question of infighting should be addressed, healthy competition is fine, losing lives because of it is not.
Posted by Forrester at 6:02 PM