It has been a good week for beleaguered Iraqi PM Nuri al-Maliki. And given my recent comments about Iraq in this space--- he needed it. Over the last month he’s lost his reelection campaign (by a whisker), had the US tell him “yes, you lost,” act like a petulant (yet dictatorial) child, and had Baghdad explode around him.

Well, he needed some good news--- and he got it. First, at a moment when he desperately needed something to strengthen his position, Iraqi (and American, I guess) forces whacked the top two al-Qaeda in Iraq (AQI) leaders in what sounds like a pretty cool raid. Not only did they get these two terrorists, but reports also claim that Iraqi forces managed to score some pretty interesting intelligence. Laptops and other documents appear to be a treasure of information and even indicate that the AQI folks were in pretty good contact with Osama bin Laden. 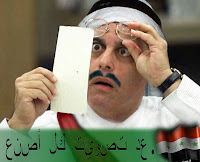 Then, mere hours after Maliki announced that his forces had disposed of the AQI leadership, Maliki also received word that he was getting his sought after vote recount for the Baghdad area. Of course, this may well contribute to the horrible instability already rocking Baghdad, but—hell, it’s good for Maliki, so…

Tom Friedman recently wrote about how political victory breeds political power. He even quoted Osama bin Laden’s famous “if people see a weak horse next to a strong horse—of course they prefer the strong horse” phrase.

Maliki has had a few victories this week… let’s see if it breeds another term in power.
Posted by David at 1:51 PM