Ok, well not quite, but so much talk about UAVs buzzing around the sky, it's time to look down! The up coming Unmanned Undersea Vehicles conference is set to commence in June of this year. It will be held at the Naval Undersea Warfare Center in Newport RI. Though the conference is rumored to include rapid fleet capability insertion and most probably discussions and developments in greater degrees of autonomy, if you don't have a secret or higher clearance, consider yourself un-invited.

The UUVs, as they are so lovingly referred to, most commonly resemble baby submarines or manta looking vessels. They range anywhere from under 100 (man portable) pounds to over 20,000 pounds. The main functions of the UUVs include: intelligence, surveillance, and reconnaissance, mine counter, anti-sub warfare, identification, oceanography, communication and navigation, payload delivery, information operations (ie spying!) and time-critical strikes.
The vehicles were used in 2003 in Operation Iraqi Freedom in what was described as securing of ports for the entry of humanitarian aid. They were used further to go up river at Az Zubayr and Karbala to check the river bottoms for mines, overcoming the challenges of tidal extremes and limited visibility. The machines are much more capable of withstanding such pressures that the human counterparts, not to mention taking some of the life loss risk away in identifying possible mine locations. 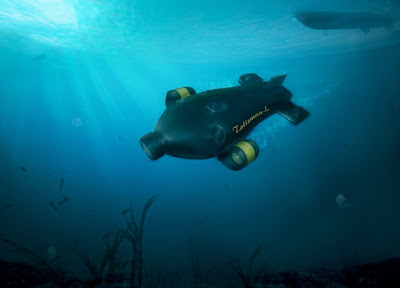 The Talisman L for example can be deployed from almost any vessel and controlled from a stand-alone console, integrated into a combat management system or programmed to function autonomously. BAE systems deployed one in the UK in 2009 to monitor harbors and ports, protecting service men and women. The Talisman L can reach speeds of 5 knots, can hover and move in any direction, and contains high definition forward and side sensors as well as multiple cameras from an array and angles. It can be coupled with its larger sibling the Talisman M to allow for full spectrum approach from detection to neutralization of threats.
Really these things are pretty cool, like little baby remote control submarines, sounds like fun. The fact that they are extremely useful helps as well. The force of the UUVs in the future looks promising with new technology and demand, especially given the Navy 2004 Unmanned Undersea Vehicle Master Plan. So remember, don't just look to the sky!
Posted by Forrester at 2:00 AM