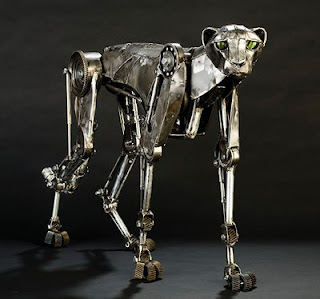 Alright so perhaps we are not yet looking at lions (or cheetahs) and tigers and bears just yet, but the robots of the future, yea they’d have you running too! Whether you’re talking about UAVs or UGVs the future of the military, not only in the US, is taking on a new form. No not I-robot worthy, but machines replacing humans in tactical operations is no longer a “flying cars’ aspiration of the future.

Thinking about RMA and the change in how warfare is conducted, the robotic armies being built world-wide are at the top of the list. Project Alpha is a US Joint Command project or more specifically a rapid idea analysis group that aims to employ robots to replace humans on the battlefield. The major study is titles “Unmanned Effects: Taking the Human out of the Loop” in which it is concluded that by 2025 robots on the battlefield will be the norm. Referred to as tactical autonomous combatants (TAC), working on the ground, in the air, space and under water, the robots will be “more lethal, more mobile, and more survivable”. The biggest obstacle, according to robotics developers, will be integrating the robots into military culture while lesser challenges include sustainable power supplies and improved AI. However, as other international players develop their own TAC Project Alpha’s director, Dr. Russ Richards says “We can be at the vanguard, or we can lag behind and someday have to oppose a lethal robotic force. Better to be in the lead.”

Noticeable examples being Russia and Israel, who has progressively increased the role of unmanned combatants concentrating more notably on the larger vehicles such as the Guardium ground vehicles to patrol Gaza and Lebanese borders, and Protector SV heavily armed, unmanned, speedboat (also employed by the Singapore Navy). As Lt Col Oren Berebbi told the WSJ “Were trying to get unmanned vehicles everywhere on the battlefield for each platoon.” Aside from the above mentioned options, Israeli air forces also employ UAVs and unlike the US, they claim to be operable by the average new recruit, without extensive training. Russia on the other hand seems to be on the same track as the US, smaller and maneuverable.

As Military Robotics 2010 approaches in May, held in London, what can we expect to see? Projects like the US Project Alpha seek advancements in tactical bots that can walk through minefields, deactivate bombs, clear hostile buildings, eavesdrop, and detect chemical agents. In having such criteria there have been advancements in animal and insect like robotics that do just that.

BIG DOG for example, is designed for rough terrain like that in Afghanistan, reacts with dog –like limbs, balances itself and can carry a load, and best of all, it won’t get tired of climbing that mountain or take issue with the snow and ice. (watch it in action)

Giving new meaning to a “fly on the wall”!

Insect cyborgs are even more interesting! Developments linking up with the best of nano-system technology allow developers to inject live insects with silicon chips that can detect explosives, bug conversations and so much more. The insect’s movements are controlled by ultrasonic remote control and may prove to be ideal for many missions, and really insects are going to beat out digitals and camo patterns in more instances than not. 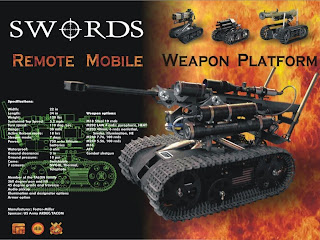 The more common forms of these TACs will be in the form of smaller mounted guns on tank treads, like the TALON. In this case these maneuverable, human operated robots carry anything from cameras, to machine guns to rifles or anti-tank rockets, allowing for the clearing of hostile areas or reconnaissance missions.

So no, the robots of tomorrow don’t look like Lassie or that cheetah you saw at the wild animal park, at least not yet, but be weary of those dragon flies! Ultimately, the precision guided and unmanned aspect of RMA has a future and it is very intelligent, even if it is artificially. The question that has yet to be answered is how such advancements will be received, both by the international community and the military itself. As the problematic reactions to UAVs has noticeably increased as of late, is has not stopped the continued production and deployment of the vehicles. Will this robotic future make entities more willing to initiate conflict given the lack of human loss that would be involved? Is there too much disconnect from operators and conditions on scene? Robotic senses still are no match for an actual human but in some ways, the use of these super bots can be employed to save lives.
Posted by Forrester at 12:40 AM