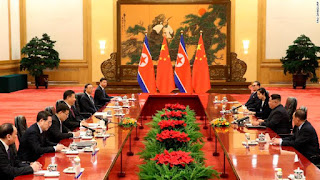 On March 28th, the Chinese government announced that Kim Jong Un, North Korea's leader, had arrived in China and met China's president, Xi, JinPing. They met each other in Beijing; sending diplomatic speculation off the charts and leaving the prospects for talks about North Korea's nuclear weapons.

Before Kim Jong Un's visit, he kept this trip as a secret until he pulled into Beijing. During his two-day stay, the mystery continued, Mr Kim's first meeting with any head of state and his first foreign trip since he took power in 2011. This trip has not been confirmed until he has returned in Pyongyang.

Even many details were not reported during his secret trip, the trip affirms China's central role in keeping the peace in Korean Peninsula after many influences shifted to the South Korea and the United States. 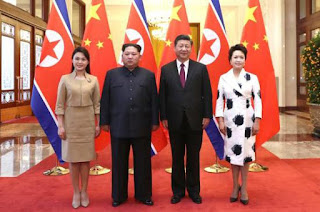 According to Xinhua News, Mr. Kim showed his attitude in dealing with the Korean Peninsula issues. Based on his words, if South Korea and America responded to his efforts "in good faith" and built a "peaceful and stable atmosphere", then the issue of denuclearisation could be resolved.  To North Korea, building a "peaceful and stable atmosphere" means the withdrawal of American troops from the peninsula and the end of America's military alliance with South Korea and Japan.

It seems a long way to proceed until achieve North Korea's "peaceful and stable atmosphere". However, after meeting with Mr Kim, the Chinese Foreign-policy officials, Yang Jiechi also would visit and talk with South Korea. Regarding of Mr. Kim's schedule, after his China's visiting trip, he will also visit the United States and talk with South Korea's president, Moon Jae-in as well. No matter what the result it is, being positive in negotiation is conviviality for the Korean Peninsula.
Posted by Rose at 1:06 PM