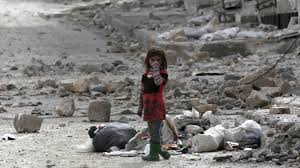 Just in this morning, President Trump twitted that "Many dead, including women and children, in mindless CHEMICAL attack in Syria. Area of atrocity is in lockdown and encircled by Syrian Army, making it completely inaccessible  to outside world. President Putin, Russia and Iran are responsible for backing Animal Assad. Big price to pay. Open area immediately for medical help and verification. Another humanitarian disaster for no reason whatsoever. SICK!"

As we can see, Mr. Trump was very angry and condemn Syria for 'chemical attack' on Douma. In response, Mr. Trump ordered a cruise missile attack on a Syrian air base. Before President Trump twitted, the US state department said the attack, if confirmed called for an "immediate response by the international community".

There were many people died or hurt during this chemical attack. Not only the U.S president, but also the French President Emmanuel Macron has also claimed that if the Syria government continue using chemical weapons against civilians, then French government will strike Syria. 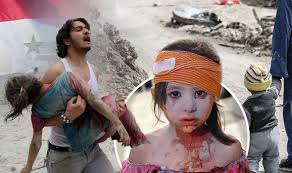 Besides Russia, Syria also reacted to the 'chemical attack', the Syrian stats media said that the 'chemical attack' happen as a result of the advance of government forces through the Eastern Ghouta. Syrian State also mentioned that a deal had been struck with Jaish al-Islam to allow them to leave Douma within 48 hours.

No matter what happens, each country should not use 'chemical attack' in Syrian.
Thinking of the number of died children, women, it such a huge disaster, Syria government should protect its citizens' lives. Moreover, as International players; Russia, Turkey, Iran, they should take more actions to maintain the local  region more stable instead of only pursue their own benefits in Syria.