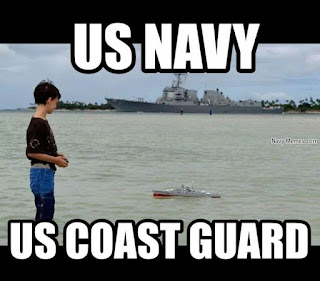 Army, Navy, Air Force, Marines…Coast Guard. Often times the United States Coast Guard is left out of the conversation when discussing US military branches. There is no denying that there is cause for this negligence. The US Coast Guard (USCG) is primarily a policing and rescue organization. Majority of operations occur along the coast (for obvious reasons) as opposed to deep waters. The Navy picks up where the USCG leaves off by patrolling and operating in the deep waters of the oceans. This has created a bit of a love-hate relationship between the two branches. The negative connotation associated with the USCG comes in a variety of forms but the most common presents itself as a nickname; USCG servicemen have been coined (by other branches) as Puddle Pirates. While the USCG may not possess some of the flashier weapons the other branches have, they are still important in ensuring United States’ safety. Joint operations still occur with the USCG and other branches as well as non-military organizations. Despite their lack of time spent in the spotlight the USCG is important to remember. It’s time to be more inclusive with the Puddle Pirates, the step-child of the military, the United States Coast Guard.