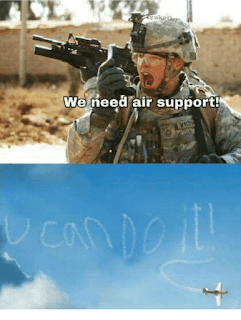 Aircraft have taken on important missions within the warfighting realm such as strategic bombing, interdiction, reconnaissance and airlift.  However, the Air Force has put less emphasis on close air support (CAS) and has instead put more emphasis on capabilities that solidify its role as an independent and autonomous command within the Department of Defense.  Due to this, the U.S. Air Force should divest itself of the close air support role and instead transfer the mission to the service component that relies on it the most; the Army.

Early airpower theorists such as Douhet and Mitchell saw strategic bombing as the premier role of an air force.  This stemmed from the belief that massing firepower on an enemy to weaken its morale and industrial capacity would quickly end a war.  During WWII, General Hap Arnold beloved in this as well and instead of allowing the beloved B-29 bomber to fall into the hands of the Army and Navy commanders, he lobbied for them to be assigned under the 20th Air Force.  Arnold's fear was that under the Army and Navy, the B-29 would be used in a tactical support role instead of strategic bombing.  Not much has changed over the years, the Air Force still fancies itself as a strategic entity with a vast global reach and still regards CAS as a waste of the Air Force's time and effort.

The procurement of the F-35, one of the latest and greatest 5th gen fighters, seems to support this as well.  The new fighter aircraft boasts some impressive technology such as enhanced survival capabilities in high-threat environments, next-generation stealth technology and enhanced situational awareness due to its integrated sensor package.  Although the F-35 is impressive, its ability to provide much needed close air support for ground commanders may be hampered by the very capabilities that set it apart.  With the F-35 taking on a multirole mission and forcing out the beloved A-10, the very real possibility exists that the jack-of-all trades F-35 will find itself flying more sorties that supports Air Force priorities and objectives.  This move would not be without precedence (as mentioned earlier).

Indeed, WWII is not the only example where Air Force objectives such as strategic bombing and interdiction took priority over close air support.  A 1950 document produced by the U.S. Army'sX Corp highlights this very thing.  The document brings to light the frustrations the Army has had with Air Force CAS such as lack of purpose built CAS aircraft, prioritizing CAS missions no higher than third, lack of Air Force tactical control parties and the desire to maintain full control over its assets by Air Force personnel and not the commander on the ground.

The problems outlined above with Air Force CAS operations in support of Army units is not new.  The Air Force has continued to show its lack of desire to support its sister services and consistently prioritizes its own objectives above all others.  This lack of desire to conduct CAS can be seen in its recent purchase of the F-35 multirole fighter.
The Army will never receive the CAS support it needs as long as it plays second (if not third) fiddle to Air Force priorities.  By taking possession of Air Force A-10s and assuming the fixed-wing close air support role, the Army can prioritize CAS operations and maintain the tactical advantage.  This will ensure that any tactical ground fight is not a fair one.  As well, the Air Force can take advantage of the opportunity and offload its A-10 Warthogs as well as its bemoaned role in tactical air support.  The Air Force could then refocus on its true passion: interdiction, air superiority and ineffective strategic bombing campaigns.

I believe it is past due time to dust off tactical air command doctrines as a CAS asset for the army. troops in contact with the enemies KNOW what FUBAR the A10 is capable of. accountants tell us the gau-8 is ineffective in CAS. taliban and isis will agree that statement is BS. F35 in CAS is a lost cause. Marines will regret losing the harriers. it is a good thing to drop a half million dollar 155 on the bad guys. a 500pound bomb is somewhat more effective. getting steel on target when it needs to be there is what is important. we will fight with what we have now, not some scientist wet dream for next decade, which is about what it takes to field a new WS.
army and marine troops in contact need that organic CAS asset to support their advance or defense. they don't need wishful thinking from some puzzle palace clowns.