Arms Sales Between the U.S and Taiwan 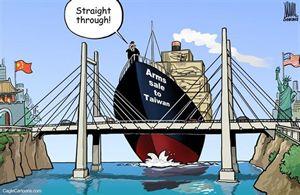 Arms sales between the U.S and Taiwan has been became a huge topic for Chinese central government. After Tsai, Ing-wen took over the government in Taiwan, she continued the friendly relationship between the U.S and Taiwan. Moreover, after president Trump administration approved the marketing license required for American manufactures to sell technology to Taiwan that would allow Taiwan to build their own submarines.

It is inevitable that Chinese central government opposed the United States to sell weapons to Taiwan. Specifically, in this April, Taiwan's Ministry of National Defence confirmed the U.S Department of State had agreed to grant the license needed to sell the technology to Taiwan. This makes Taiwan has an ability to build its own submarines.

As we know, Chinese government will never and ever change the "One China" policy, even Taiwan issue could not be easily be solved. Taiwan is still one of the most sensitive political issue for Chinese central government, for Taiwan, being independent is not possible under the President Xi.

Tsai Ing-wen became the leader of Taiwan and became Chin's hostility. The reason is that she comes form the pro-independence Democratic Progressive Party and was elected in 2016. Because of this, China will strengthen to overlook the Taiwan's policy, especially its military policy with the U.S. The reason is that China fears Tsai, Ing-wen push Taiwan's formal independence.

So the Arms sales between the U.S and Taiwan will really intensify the tension between China and Taiwan. Meanwhile, it also will hurt the future relationship between the U.S and China in solving the regional issues. However, for Taiwan, especially for Tsai, Ing-wen's administration, she is eager to gain more supports form the United States and strengthen Taiwan's position in the world.
Posted by Rose at 9:49 PM

Hello Everybody,
My name is Mrs Sharon Sim. I live in Singapore and i am a happy woman today? and i told my self that any lender that rescue my family from our poor situation, i will refer any person that is looking for loan to him, he gave me happiness to me and my family, i was in need of a loan of $250,000.00 to start my life all over as i am a single mother with 3 kids I met this honest and GOD fearing man loan lender that help me with a loan of $250,000.00 SG. Dollar, he is a GOD fearing man, if you are in need of loan and you will pay back the loan please contact him tell him that is Mrs Sharon, that refer you to him. contact Dr Purva Pius,via email:(urgentloan22@gmail.com) Thank you.

My name is Mr Christopher Nissan, I am a Citizen Of Houston. Have you been looking for a loan?Do you need an urgent personal loan or business loan?contact Dr Carrol walker Finance Home he help me with a loan of $42,000 some days ago after been scammed of $2,800 from a woman claiming to been a loan lender but i thank God today that i got my loan worth $42,000. Feel free to contact the company for a genuine financial service. Email:(infoloanfirm8@gmail.com)

My name is Doris Susan from Germany, I contacted Mrs Carroll Walker Company for a business loan amount of $40,000. Then i was told about the step of approving my requested loan amount, after taking the risk again because i was so much desperate of setting up a business to my greatest surprise, the loan amount was credited to my bank account within 24 banking hours without any stress of getting my loan. I was surprise because i was first fall a victim of scam! If you are interested of securing any loan amount & you are located in any country, I'll advise you can contact Mrs. Carroll Walker Company via email: Contact him through the email . infoloanfirm8@gmail.com

Thank you for beingg you