Debt, an imminent threat to US National Security 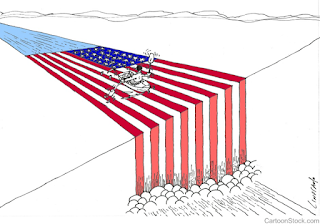 The ability to field and maintain a robust US military, and all other aspects of our national security apparatus, will depend in the long-term on our capacity for sustained responsible investments. The current US national debt and an acceleration of debt accumulation projected with the most recent federal budget expenditures and simultaneous reduced revenue from the 2017 tax reform bill unquestionably diminish US capacity to sustain national security investments. US debt will dictate diminished national security investments and American military capacity in the future.
The following was the Congressional Budget Office’s (CBO) response to the ranking member on the Senate Finance Committee, Senator Ron Wyden’s request for an assessment of the net budgetary and deficit effects of the “Tax Cuts and Jobs Act of 2017” Public Law 115-97


This letter responds to your request for information about the estimated deficits and debt under the Conference Agreement of H.R. 1 as filed by the Conferees on December 15, 2017. The Congressional Budget Office and the staff of the Joint Committee on Taxation determined that provisions in the Conference Agreement would increase deficits over the 2018-2027 period by $1.5 trillion (not including any macroeconomic effects). By CBO’s estimate, additional debt service would boost the 10-year increase in deficits to $1.8 trillion. As a result of those higher deficits, debt held by the public would increase from the 91.2 percent of gross domestic product in CBO’s June 2017 baseline to 97.5 percent. (1)


“The human and material resources that make a great society are produced at home, not abroad. An ambitious foreign policy built on a deteriorating domestic base is possible only for a limited time; like the light cast by an extinct star, it is predestined to come to an end.”   Senator J William Fulbright, 1966 The Arrogance of Power
Posted by Unknown at 12:25 PM