Today China launched it's first ever domestically built aircraft carrier. The as-yet unnamed Type- 001A moved from drydock to the water after a brief ceremony. However, the Type-001A still has to undergo extensive outfitting and testing before it is ready to begin active duty. Indeed, the carrier is not predicted to be ready for another two years. While the Type-001A is vastly superior to China's only other aircraft carrier, the Liaoning, which was originally constructed as a Soviet Kuznetsov-class carrier and purchased from Ukraine in 1998, experts have been quick to point out that the Type-001A is still inferior to the oldest American carriers still in service. This is indeed true, the Chinese navy cannot hope to gain ground on the production of American carriers particularly as the U.S. Navy's USS Gerald R. Ford, representing the first in a new class of supercarriers, is set to be fully commissioned later this year. However, focusing on the technological disparities between the carrier fleets, while easy to illustrate and understand, misstates the real differences between the powers. 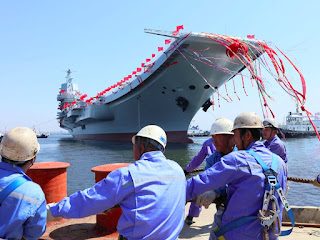 The U.S. Navy has spent the last 60+ years building its ships, strategic doctrine, and training around the concept of the carrier group. Most major conflicts that the United States has been involved in since World War II have had the carrier group at center stage. China, by contrast, has not participated in any major military conflicts since the Korean War and it's navy is largely untested. For China to truly challenge the American dominance of the seas they will have to make up over half a century's experience in a relatively short amount of time. Without it, their new aircraft carrier will not be projecting power over long distances but will represent exactly what critics of the carrier age envision, a 1,000 foot floating target.
Posted by Peace, Love, and Understanding at 12:51 PM