The chess game between the U.S. and Russia has advanced another turn, as two USAF F-22 Raptors touched down in Lithuania. After the Russian fly by fiasco in the baltics it was only a matter of time till the US started flexing back, and the arrival of arguably the most powerful air asset in US military history in Putin's backyard sends a pretty clear message message. Though it is plain as day what the US is trying to accomplish with the maneuver, it is unclear what the russians next plan of action will be. Upon the landing of the two fighters were greeted by the Lithuanian president himself, who stated "Without singling out any neighbor, I would like to say that no one has any right to poke their noses into here... This is a demonstration that the United States is honoring its commitments and is ready to protect our region with all the most modern measures." 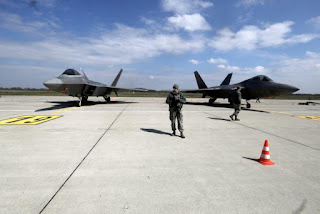 Putin and the Russian elite will no doubt refuse to let this just slide. It is likely that they will retaliate in kind soon enough, but it is unsure how much effort they will be muster as the resources they have for all these shows of force are beginning to wear thin, despite public opinion remaining strong and feeding off of these exchanges with the west. Modernization efforts have already began to suffer from the massive increase in stress, and the F-22 is more modern than anything Russia will be able to crank out in the next decade much less year. At this rate, it is only a matter of time till the US can put Russia back into check.
Posted by LeroyJenkins at 11:03 PM