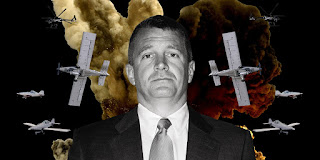 “We will not go quietly into the night!” Fully embodying this epic Independence Day quote, Erik Prince, former head of the mercenary organization Blackwater, is still very much involved in the privatization of warfare. He currently co-owns and operates Frontier Services Group (FSG) and ran into trouble with his board of directors once they discovered his illicit dealings. Recently, Prince began developing his own secret air force in Austria out of former Thrush 510G crop dusters. Described as “cheap, durable and discreet”,1 Prince ordered the aircraft be outfitted with a bulletproof cockpit, an armored body, heavy machine guns, rockets, and surveillance technology. These planes would be ideal weapons for struggling governments dealing with insurgencies, and this is exactly who Prince marketed them to initially.

The South Sudanese government planned on being the first to buy but complications ensued when the buyers refused to negotiate the contract with anyone but Erik Prince. This alerted FSG that it might need to look more thoroughly into Prince’s Thrush project. Interestingly, many of the altercations made to the crop dusters violated American defense regulations along with Austrian export laws. Several of those who outfitted the planes were unaware of the plane’s destination, the work’s illegal nature, or that Prince was even their boss. The former head of Blackwater kept his board of directors as much in the dark as possible so that he could continue this project uninterrupted. Following the South Sudanese debacle, Prince found a buyer in Central Asia, who his board rejected out of hand. Ignoring their order, Prince planned to sell one of the Thrush 510Gs to Bulgaria who would then transfer it to the Central Asian client.

Once FSG discovered this subterfuge, the board of directors, headed by retired Adm. William Fallon, banded together to strip Prince of any day-to-day responsibilities he had over the company. However, backed by the Chinese investors and his other friends on the board, Prince managed to maintain his position in FSG.

The repercussions of this will be seen if Prince can successfully generate and market these Thrush fighters. The American and Austrian governments will legally fight the exportation of these machines, but the Chinese provide a willing market for Prince to sell to. Developing countries can then purchase the aircraft from the Asian powerhouse. This reoutfitted Thrush gives struggling governments an upper hand against insurgencies, perhaps instilling stability in the region but also maybe instating dictators. The only certainty is that Erik Prince won this round and will last to see another.
Posted by Unknown at 12:34 PM