On April 15, China celebrated its first 'National Security Education Day.' As part of their, um, celebrations, posters titled "Dangerous Romance" were put up throughout Beijing. These posters display a cartoon strip that shows a Chinese woman falling for an American man and, through subversive tactics on the part of the American, unintentionally giving sensitive Chinese government information to an American spy. 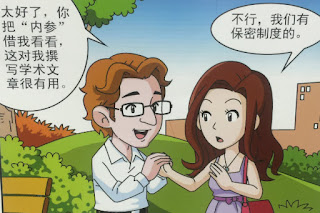 On the surface, these cartoons are almost hilarious. It is an over-the-top portrayal of an "American spy" tricking a woman into dating him in order to gain access to "internal reference data." He calls her pretty, gives her gifts, and declares that it was love at first sight.

Deeper down, there are clearly issues of distrust between the two nations, as well as a barely hidden level of sexism. Of course the Chinese woman falls for the ploys of the American man, because what single, working woman in China can resist the charm of a "handsome, romantic, and literary foreign boyfriend"? Who can expect her to stand up to her boyfriend when he uses emotional pull to convince her to violate her duty of confidentiality?

On top of the lovely portrayal of women, there is of course the larger issue of how this cartoon portrays the US. One issue of concern is that many Chinese citizens who read this cartoon may leave with a newfound distrust of Americans, or the belief that American spies are a much larger threat to the average Chinese citizen than they likely are, which could lead to a strain on US/China relations at the most basic level. The second issue is that the cartoon clearly demonstrates a pre-existing, deep-seated level of distrust towards Americans in the Chinese government, which again will likely have a strong effect on relationships formed and maintained between our two governments.

Although this is a fairly superficial analysis of the "Dangerous Romance" between the Chinese and the Americans, I hope that it will be a conversation starter on an issue that is of real importance to US global relations. And I hope that you will never forget the dangers of falling in love with "White Guys named David."

I was so anxiuos to know what my husband was always doing late outside the house so i started contacting hackers and was scamed severly until i almost gave up then i contacted this one hacker and he delivered a good job showing evidences i needed from the apps on his phone like whatsapp,facebook,instagram and others and i went ahead to file my divorce papers with the evidences i got,He also went ahead to get me back some of my lost money i sent to those other fake hackers,every dollar i spent on these jobs was worth it.Contact him so he also help you.
mail: premiumhackservices@gmail.com
text or call +1 4016006790