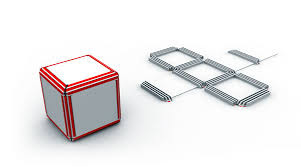 You may have heard of 3D printing, the printer that will take a number of materials (ex. Gold, silver, steel, wax, epoxy resins, plastics, and many more) and shape them into a programmed graphic design. While these printers have begun to miniaturize and become locally available in shops, the market has largely flattened from its high expectations two years ago, much to the dismay of stockholders of 3D Systems Corporation, and Stratasys Ltd.. Entering the market now, however, is something entirely different: 4D printing allows for an object to self-assemble over time. 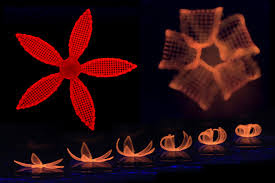 Despite the set back in the 3D market, the Wyss Institute for Biologically Inspired Engineering at Harvard University has been working on 4D printing, to make 3D printed objects react to stimuli, such as water. Receiving funding from the United States (US) Army Research Office and the National Science Foundation, the program has based their design off of natural occurring stimuli of humidity and temperature for how a flower blooms, or a pinecone opens. Using hydrogel, the scientists have been able to code how they want the object to change once introduced to the specific stimuli. As Director Donald Ingber says, “it enables the design of almost any arbitrary, transformable shape from a wide range of available materials with different properties and potential applications.”

What could be the limits of these applications, and why is the Army Research Office investing in their work? Because this self-assembling technology can change the way the military operates in the field, from shelter, to logistics, and protection. The US Army Research Office is actually investing a total of $855,000 in three programs including Harvard University, University of Pittsburgh, and University of Illinois. Part of the problem the military has run into with 3D printing is that while is easy to print 3D objects, assembling them takes man-hours. 4D printing solves this (Check out Tibbits’ TED talk to see what I mean and more including adaptive piping). The Army could use this technology to potentially create camouflage that changes to a soldier’s environment, self-assembling shelters, bridges, and temporary roads. 3D printing has already managed to build such large structures as bridges, with 4D printing; an army group could simply drop a block into a river and watch it self-assemble in order to cross, saving them from exposure to potential enemy fire.
Posted by The Sundance Kid at 10:41 PM

I think this is one of the most significant information for me. And i’m glad reading your article. But should remark on some general things, The web site style is perfect, the articles is really great : D. Good job, cheers cheap sign boards

It might appear like numerous shoppers are investigating the group for various offers. That is a decent attempt as the shot is truly open inside here.
Cheap Print Services Near Me

Great Article,
4D Printing is one of the great invention in entire manufacturing world.