You have to give it to them: they are persistent 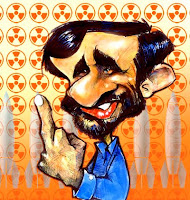 Perhaps it was just me, but I was under the impression that the Stuxnet virus set Iran’s nuclear program back years. So it surprised me when I saw this Washington Post article claiming major advances were just around the corner for Iran. I decided to look into it a little further.

First, I want to go over what Stuxnet actually did, mainly because it is pretty freaking cool. In layman’s terms—the only way I could understand it— the virus caused Iranian nuclear centrifuges to spin out of control while also fooling Iranian safety controls to believe that everything was normal, resulting in destruction of this nuclear equipment. However, whatever was broken was apparently quickly replaced. It is still unknown if the virus will do any additional damage in the future.

Now, it appears that Iran is planning new, more advanced centrifuges. The IR-2M and the IR-4 would be able to enrich uranium faster than Iran’s current centrifuges, the IR-1. In fact, the article the new technologies could be a game-changer: “According to the first reliable published estimates, the increase in the production of enriched uranium could be huge — an increase in output of at least 600 percent per machine.”

What is disconcerting is that the West’s options regarding Iran’s nuclear program are running out; we have pretty much ran the policy-options gauntly toward Iran. As discussed in another class, although economic sanctions may have helped prevent Iran from getting nuclear weapons to this point, they have not achieved the main goal in coercing Iran to end its nuclear program. Presuming that Stuxnet originated from the West, it still was not effective in setting back the nuclear program more than a year and today, they appear back on track. Write in ‘fail’ beside the covert action option. At this stage, diplomatic solutions seem unlikely. And military conflict would be disastrous for everyone involved. What is left?

Perhaps more advanced or more stringent sanctions can be agreed upon—and legitimately enforced—by the international community. Or maybe the U.S. and Iran can overcome their differences and return to the negotiation table. And one can only hope that the U.S. will not open a fourth military front in Iran. I’m glad the U.S. government has ‘experts’ whose job it is to come up with creative new approaches to such issues. Think about it, one day soon we could be among this group. It’s a lot of responsibility.