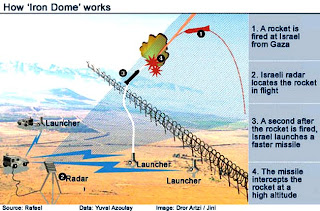 By now, we’re all pretty familiar with Ronald Reagan’s ill-fated “Star Wars” system and the decades-old debates about U.S. missile defense programs. For many of us, the words “missile defense” immediately conjure images of nuclear weapons and Cold War treaties. Today’s air-defense game isn’t strictly nuclear, however, and the teams on the field aren’t just the U.S. and Russia. For the past four years, Israel has been working on a defense system of its own…and just yesterday, they learned that it actually works.

On April 7, the Jerusalem Post reported that Israel’s Iron Dome air defense system intercepted a Grad-model Katyusha rocket fired from the Gaza Strip. Today’s news reports from the region indicate that the system has intercepted three additional rockets just outside of Ashkelon, the coastal city where the Iron Dome is based. According to Israeli officials, this is the first time that the air-defense system has succeeded in a real-world, short-range interception.

Developed by Rafael Air Defense Systems, the Iron Dome is designed to intercept short-range rockets and 155-mm artillery shells fired from up to 70 km away. The system uses radar to identify the launch of an enemy rocket, then calculates the rocket’s trajectory and transfers the data to a local control center. This data is used to determine the rocket’s likely impact area; if the rocket is found to be a threat, an interceptor missile is deployed to neutralize it. According to promotional materials, the system is able to “handle multiple threats simultaneously and efficiently,” and can operate in any weather conditions and during any time of day or night.

The Iron Dome is one piece of a three-pronged approach to counteract threats to Israel’s civilian population along its northern and southern borders. The Arrow System, a theatre missile defense system touted as “more advanced than the Patriot Missile,” is currently being developed and tested in partnership with the U.S. The U.S. is also involved in the development of the David’s Sling project, which is intended to counteract cruise missiles and other medium-range threats.

Despite the high cost of the Iron Dome – approximately $210 million for the system itself, with estimates as high as $50K to $100K per interceptor missile – it’s understandable why Israel would consider this a worthy investment. The Israel Security Agency’s 2010 annual report listed 150 rocket launches and 215 mortar attacks from Palestinian forces, and noted that Iran successfully smuggled approximately 1,000 mortar shells into the Gaza Strip. Although the number of terror attacks decreased by almost 50% from 2009, 798 incidents in a single year is still high. Recently, tensions in Israel have been running particularly high after a March attack near a Jerusalem bus station and a Hamas-led attack on a school bus near the Gaza border on April 7. Civilian and territorial security should be a priority for any government, and Israel is certainly no exception.

What’s more interesting here is the implications that the Iron Dome’s success could have for missile defense programs elsewhere. While the system is still in its experimental stages and was unable to intercept at least two missiles fired in the past two days, its initial high levels of functionality could interest other governments willing to pay the high costs. Singapore, which has purchased Israeli Aerospace Industries’ naval anti-aircraft systems and other Israeli weapons systems in recent years, expressed interest in purchasing the Iron Dome back in April 2010. The Dome would be used to protect the Port of Singapore, one of the world’s most significant ports for shipping containers, transshipments, and crude oil shipments. The Jerusalem Post reported last year that NATO forces and “several European countries” had also indicated interest in the system. If these reports are true, Rafael should expect a barrage of renewed international interest and lucrative contracts in the months ahead.

Israel’s success will also likely encourage states with their own air-defense systems to reexamine or upgrade their hardware. Besides the U.S. and Israel, current members of the state missile-defense club include the UK, China, France, Russia and India. While China and India have recently conducted successful test launches of their own missile-defense systems, India’s PAD system isn’t currently able to intercept low-flying cruise missiles. As recently as last year, an Indian Defense Ministry official expressed little confidence in using PAD and the state’s aging Russian-made air-defense systems as “the country’s sole line of defense” against threats from China or Pakistan, and announced that India had begun talks with Israel on procuring the Iron Dome.

Unless Cuba somehow finds the funding for a rocket program, the U.S. most likely wouldn’t benefit significantly from a domestic Iron Dome system. However, the U.S. Missile Defense Agency HAS just signed a contract with Lockheed Martin, Raytheon and Boeing for the SM-3 Block IIB program, which will allow “early intercept capability against medium, intermediate and intercontinental ballistic missiles” by 2020. A short-range missile system like Iron Dome may also have its uses for American forces in combat theatres. Since the U.S. provided $205 million in funding for the Iron Dome system in 2010, it will be interesting to see whether it reaps any particular military benefits from its investment.

Posted by FiveMoreMinutes at 1:35 PM