"What are you doing? Those are dead batteries."

After 13 years of continuous ground operations overseas, the dismounted Infantryman continues to be overburdened while conducting modern combat operations.  Soldiers and Marine carry approximately 100lbs of equipment during a typical 72-hour mission.  This is over double the weight his father carried during Vietnam, and almost triple what his grandfather carried during Korea and World War Two.  Where does all this weight come from?  Is it poor unit discipline?  Are Infantrymen taking too much gear into operations?  No the fault lies with the design of modern mission essential equipment that simply weighs too much. 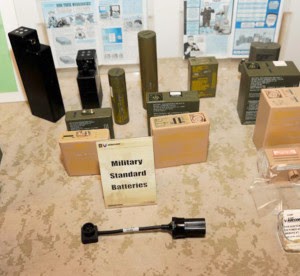 The U.S. Army, recognizing the detriment to Soldier readiness and combat effectiveness has set out to significantly lighten the load of the Infantryman.  Fortunately, the second decade of the 21st century has been an exciting time for those concerned with the development of energy and materials technologies.  One in particular, the development microbatteries utilizing “Interdigitated Three-Dimensional Bicontinuous Nanoporous Electrodes” at the University of Illinois, will provide the means for greatly reducing the burden on the modern Infantryman.  Shown below is a team of Army Infantrymen in Afghanistan - half of the weight of the radio carried by the kneeling Soldier is in the battery. 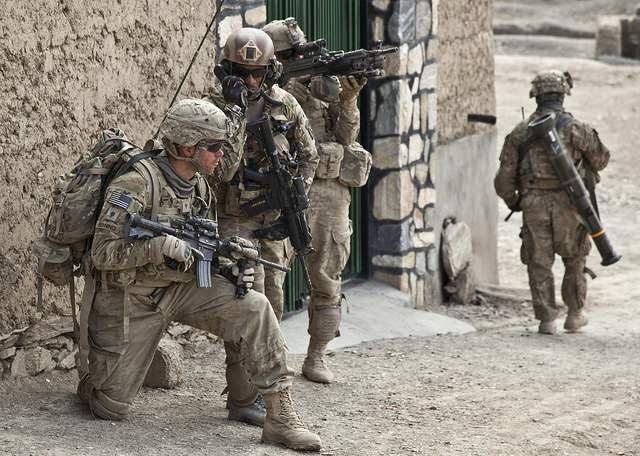 The project, supported through funding from the U.S. Army Research Laboratory, the The Department of Energy, The National Science Foundation and the Air Force Office of Scientific Research, will facilitate the development of dramatically longer lasting and smaller batteries as well as improved communications and computing technologies.   Though the current design is too costly to be economical, and scientists at the University of Illinois are striving to develop production methods that can be scaled up for commercial production 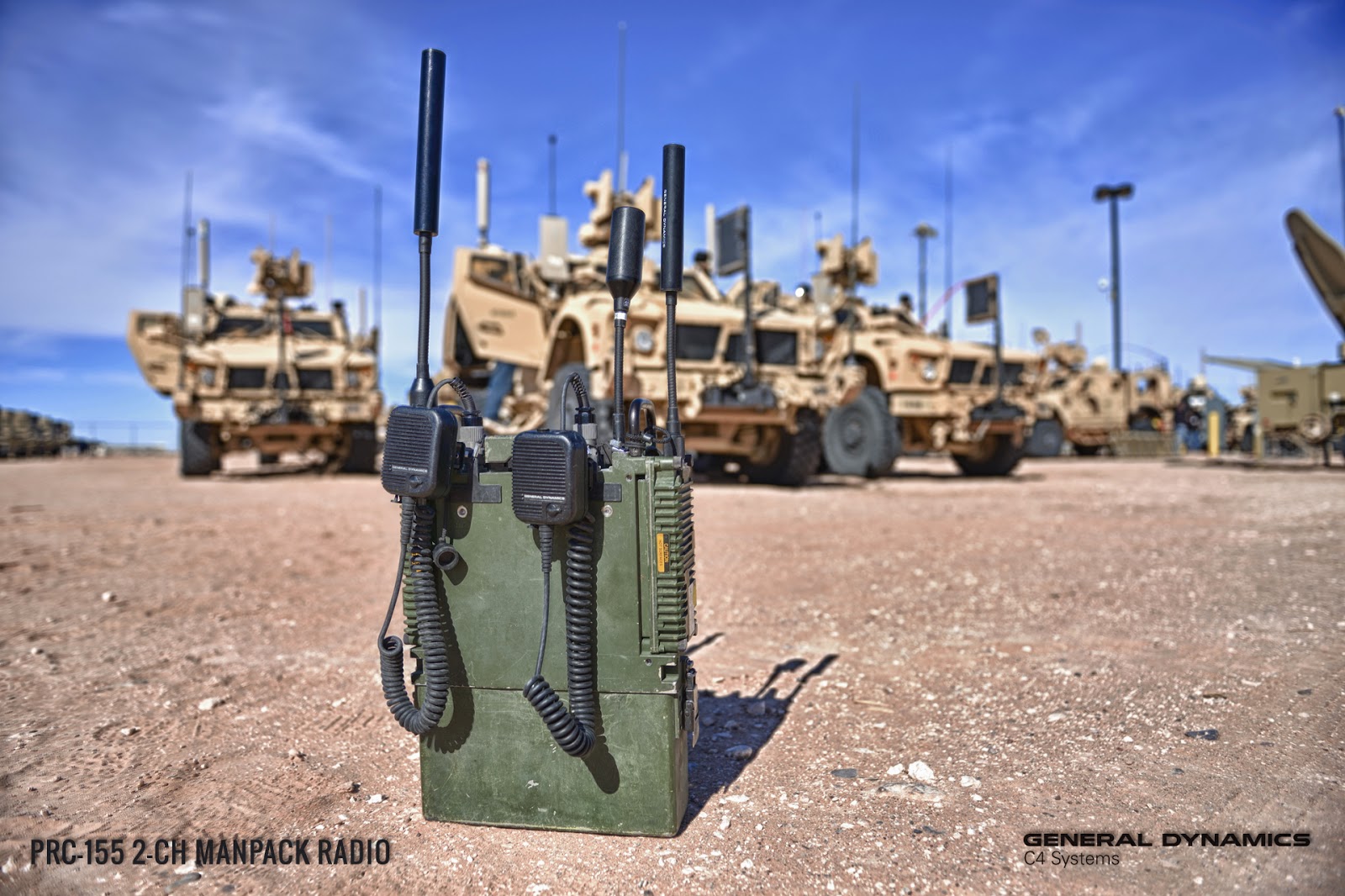 Shown above is a General Dynamics PRC-155 man-pack radio.

The problem of most modern combat support technologies, such as GPS, laser designators, and man-pack radio systems, is that they require large amounts of power and energy.  So far, this has been solved through conventional Lithium-ion batteries, but even the best designs require trade-offs between power and energy density.  Recharge times are slow, as rapid recharge of conventional Li-ion batteries reduces their overall life span.  This is where the University of Illinois’ battery, with a higher power density than a super-capacitor, and but the same energy density as current lithium-ion batteries, could make its most noticeable impact.  This new battery is rechargeable and can be charged in 1/1,000 the time needed for conventional Li-ion batteries.  It also has a power density approximately 30 times that of Li-ion batteries.  The graph below shows the University of Illinois battery (A123) in comparison to current forms of batteries and supercapacitors. 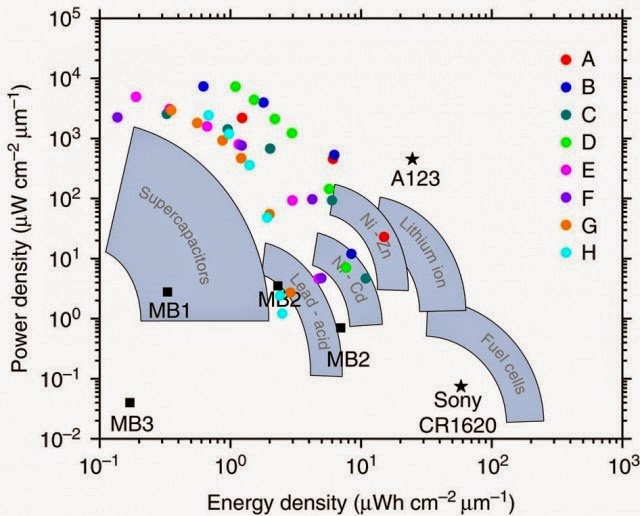 The high performance is due to the battery’s internal three-dimensional nanostructure. All batteries have some form of two main components, an anode and a cathode.  The University of Illinois team under Prof. William King built upon a fast-charging cathode design created by Prof. Paul Braun’s group, also of the University of Illinois.  King’s team developed a matching anode and then developed a way to integrate the two components at the microscopic scale.  The scientists created a lattice of tiny polystyrene spheres, filled the space in and around the structure with metal, then dissolved the spheres to leave a three-dimensional metal scaffold onto which a nickel-tin alloy was added to form the anode and a mineral called manganese oxyhydroxide to form the cathode.  A good representation of this concept is shown here below. 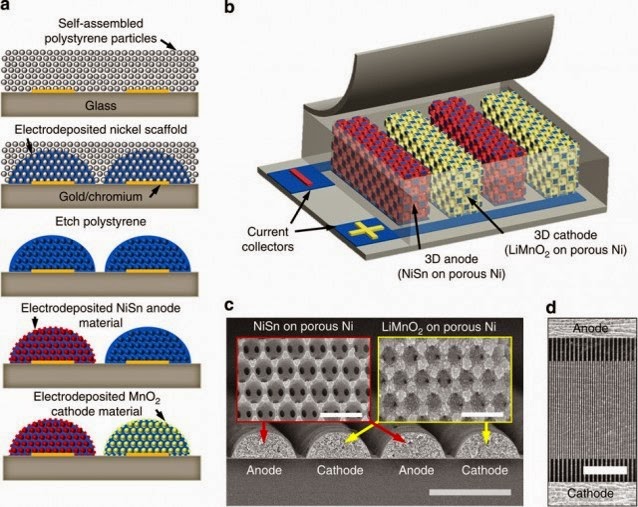 This greatly increase energy and power density means that an Infantryman will soon be required to carry batteries weighing 1/30th the weight of the previous generation model, without the need for replacements.  Knowing the Army and Marine Corps, Infantrymen will carry a back up - just in case.  Still, that alone drops the weight by 14 lbs.  The secondary effect is that convoys will no longer be required to haul pallets of batteries from one FOB to another - endangering themselves along the way.  Perhaps the best quality is their rapid recharge times.  As Infantryman begin to field solar electric generators, these batteries will be an ideal partner technology - requiring seconds to charge instead of hours.