Ukraine: Maybe it’s Time To Just Do What They Ask

The problems in Ukraine arose from former President Yanukovych’s idea to back out of the bipartisan Association Agreement treaty with the European Union in favor of making a deal with Moscow. Quickly, what started out as small, peaceful student demonstrations urging the President to strengthen ties with the EU became 500,000 strong protests calling for the deal to be made, but also for the ousting of Yanukovych. 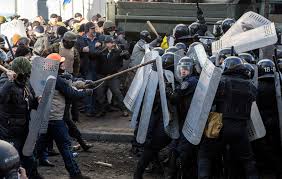 The former President’s response was to try to stomp out the opposition with riot police, which quickly backfired as the self-named Euromaidan movement gained tractions and followers. Soon, thousands were camped out in Independence Square day and night, with no intention of leaving until they got what they wanted.

When Yanukovych fled and Oleksandr Turchynov was named interim President, the heat shifted to the other side. Soon, the pro-Russia movement got off the ground, and they had to deal with the same smothering techniques that were used on those in Kiev: so-called “anti-terrorism” military operations and blockades, which were more often than not thwarted by everyday citizens who didn’t want that kind of oppression in their hometowns.

So why is the crisis still ongoing today? And what can be done to stop it? Looking to the past revolutions in Ukraine, in particular those in 1990 and 2004, someone has to cave. In 1990, student-led protests led to the declaration of Ukraine as a sovereign state, independent from Russia. In 2004, the Orange Revolution, which also began as student demonstrations, led to Viktor Yuchshenko’s victory in the presidential elections after electoral fraud, voter intimidation, and corruption were uncovered. Yanukovych lost that election after the votes were recounted, and the citizens of Ukraine saved the day.

So the lesson learned here is that the people usually get what they want. The problem today is that no one knows what Ukraine really wants. Does it want to keep Crimea a part of the country, even if most of the residents on the peninsula want to join Russia?

The best course of action is to get Russia out of the country, and hold a real referendum, one that isn’t overseen by Russian soldiers, to determine what the people in Crimea want. Then, let them have it. The vast majority of native Russians in Ukraine are in the south and the east. Most of the citizens of Ukraine want to strengthen ties with the EU. So let the people of Ukraine decide, and stop letting others interfere. This crisis needs leaders on both sides to step up and take control in a way that doesn’t include propaganda or armored vehicles. Ukraine can handle this crisis on its own.
Posted by Anonymous at 4:32 PM