Is India's potential balancing of China better accomplished by land?

Throughout our Defense Statecraft course, China has maintained a steady presence in our discussions.  These discussions have ranged from questions of what China’s role might be in subduing North Korea’s escalated threats, to its rapid growth in defense expenditure, outspending everyone else in the world besides the United States.  Frequently in discussions of China, the topic arises of who besides the United States has the interest/will/ability to provide a balance to their rise in power, and almost immediately the focus turns toward India.  However, the certainty of India to provide a regional balance to China has not truly been established, especially if there will be a long-term competition between the United States and China . 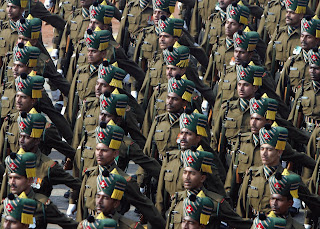 Many observers have been nonplused by the blasé attitude that the United States has seemed to exhibit over whether India will increasingly ally itself with the United States in the face of the rise of China in its global neighborhood.  Indeed, at times, the United States has seemed to believe that simply its wishing it to be so would make it true.  President Obama has referred to India as a “natural ally,” but this was only after he left them out of important speeches concerning cooperation in Asia and a list of rising Asian powers, early in his administration, for example.  More recently, the discourse between the two countries has been very favorable, but concrete action on military cooperation has lagged behind.
Nevertheless, the prevailing thought has been that if India does indeed emerge to provide a regional balance of power to China, this will occur via naval power.  To be certain, India’s central position in the Indian Ocean is near to extremely vital Sea Lines Of Communication (SLOC’s) and could lend itself to that endeavor.  However, in a recent article in The Diplomat, Evan B. Montgomery suggests that the better pathway for India to balance China, is on land.   Montgomery argues that India’s biggest challenges to their security are still land-based, and that in spite of recent naval advancements, the Indian Army is still the most important branch of their overall military.  Assuming those continental challenges do not significantly diminish, India will have to continue its commitment to land-based forces.  If India creates an all-out naval competition with China as an additional priority, this might overstress the Indian defense budgets and endanger Indian military success.  Chinese analysts already view Indian naval modernization as the first step toward India wanting to not just be able to control major choke points in the Indian Ocean, but also to project power far beyond the Indian Ocean even to China’s own littoral.   If India develops a much more far-reaching “blue-water” Navy, China might feel compelled to expand its naval presence outside of East Asia, possibly even establishing permanent foreign naval bases to protect its SLOC’s.
From the United States perspective, this outcome would be very undesirable.  With China having to invest less and less of its defense budget toward traditional land forces, it would be able to focus more and more (as it has been doing) on naval, air and missile capabilities—the things most threatening to the United States’ interests.   If India were to focus more resources toward its land forces near its disputed borders, China would have to direct some of its focus toward responding in kind.  This continental distraction for China could work well for the United States’ Pacific Pivot, and potentially be the better option for a regional balance of power.


Therefore, Montgomery argues that it may be best for the United States strategy to support what India has already been doing to bolster its land forces and land-based air forces.  The United States should further aid India with such things as intelligence sharing concerning Chinese troop movements, aerial surveillance systems, and even eventually stealth aircraft.  This approach could serve to truly balance Chinese power rather than give China reason to even more aggressively escalate its naval power.

Posted by for the common defence at 11:59 PM