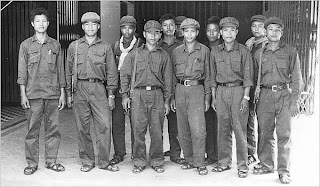 The Khmer Rouge was a Maoist regime that ruled Cambodia from 1975-1979 under the leadership of Pol Pot. The Khmer Rouge abolished religion, schools and currency in attempts to create agrarian utopia. Along the way, up to two million people are thought to have died from starvation, overwork or execution at the hands of the party. Party and military leaders that gave orders and tortured and killed millions are just now (three decades after the end of the regime) being brought to trial.

The first to trial was “Duch” who ran Tuol Sleng interrogation centre, also known as S-21, a Khmer Rouge prison where about 15,000 people were tortured and then taken to a killing field to be bashed in the skull with an iron rod until dead and thrown into a mass grave. However, Duch claims to never have personally killed anyone. He just gave the orders. (yet, he is the only one of the surviving top leaders to be put to trial that even acknowledges that mass deaths occurred)

The New York Times interviewed Him Huy, the former head of the guards at the S-21 torture house, who took part in the executions of thousands of people at a Khmer Rouge killing field. He claims that the guards were also victims of the Khmer Rouge and that he had no choice but to do his job (torturing, killing, filling mass graves) because had the job not been done, the guards would pay with their own lives.

Along with the death of thousands of S-21 prisoners, about one third (or 500) prison guards were killed. This is used to buttress the claim by many of the lower cadre of Khmer guards that they should be excused from their parts in the killings because they were under threat of death if they disobeyed. As the top leaders, those who made calls but didn’t get their hands dirty, are prosecuted, how should the court system deal with those in the lower rank and file of the organization that only followed the orders? If they believed they would be killed for not following orders, and in effect killed for self-preservation, what level of culpability should they be assigned?

Is There a Choice?

In the wake of tragedies such as the Khmer killing fields of Cambodia, at what point are soldiers, as ethical human beings, expected to break the chain of command and refuse unethical commands? Should Him Huy and the rest of the guards have recognized that the orders to kill innocent civilians were wrong and refuse to complete them even if it meant certain death for themselves?

When the atrocities committed by the Khmer Rouge are compared to the actions of US soldiers (such as the humiliation at Abu Ghraib prison, torture at Guantanamo) US citizens may be tempted to discount these episodes as isolated and nowhere near the scale of the Khmer killings. However, the same question of US expectations should be asked of US soldiers. When given orders to endanger the lives of innocent civilians or torture even not-so-innocent people…when do we expect our soldiers to exercise individual ethics that may be in conflict with the orders given them?
Soldiers are trained to follow orders from superiors to ensure effective and consistent action and for the safety of the individual soldier as well as the group. Given this, should soldiers be held accountable for following illegal orders given by a superior officer? Mr. Huy knows what would have happened to him, but what would happen to an American soldier who refused to carry out an order to torture or “take” a certain target? A demotion would be almost certain.

Thus, this supports the argument that American soldiers should be more willing to not follow illegal or unethical orders because they do not fear for their lives at the hands of their superiors. Yet, introducing the need for a soldier to second-guess all commands he is given is a slippery slope: one that would have negative consequences on successful military training.

In the wake of many atrocities committed by many militaries, where is the line for soldiers? Should they be able to question a command, or should they follow orders at all times? It is a hard question when faced with stories of the Khmer killing fields.
Posted by Goose at 12:44 PM