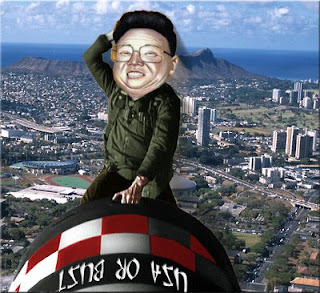 In a matter of days, North Korea will launch a rocket that everyone believes is a preliminary missile test. In many ways this is nothing new. 7 missiles were launched in 2006, all crashing into the Sea of Japan. That same year, they detonated a nuclear device.

I wonder what if feels like to be South Korea and Japan? Japan has a huge North Korean immigrant population which propagandizes Japan and assists North Korean intelligence. South Korea has seen its sailors killed by the North in two Naval battles (1999, 2002).

I do not believe that North Koreans are attempting to start a war. A Russian analyst captured it perfectly late last week when he said, "Their strategic goal is simply to die in their beds." However, their actions threaten everyone nonetheless. As the WSJ reported, the North's mastering of this technology will likely lead to weapons sales to other countries. Weapons sales = Money money. Which allows the elite to build more castles and dominate their people.

Anyways, the conclusion I'm getting to if you hadn't already guessed, is that this (these?) rocket(s) should be shot down. If Canada were like North Korea and fired a missile from British Columbia, over Alaska, and into the Bering Strait, no one would argue about the U.S. shooting it down. (I should probably hide now after that analogy).

But seriously, shooting missiles erodes the North Korean leadership's goal of dying in their sleep. I think we should make it clear that this behavior isn't going to be tolerated. They're not going to attack Seoul over it. And besides, we shouldn't be punks. How many times do you have to get punched in the face before you hit back?

Here's my proposal for our battle cry:

"Alright, times up, let's do this. Leeerrrroooooy JEEENNNKIINNS."
Posted by Warmonger at 9:08 PM

Warmonger, you really just think we should nuke 'em, don't you?... They're just flexing their emaciated muscles to show off for Obama. Once again, you're doing your name justice.

Shooting down their rocket (I'd like to think) is a little more sophisticated. It sets back the acquisition of a dangerous technology which they would sell to the highest bidder. It denies them a source of income.

Text-book, multi-lateral diplomacy failed. North Korea got lots of food, money, and gas and got to keep their guns. What'd we get?

Shooting the rocket would be a strong signal that they should go back to being the Hermit Kingdom and stop punching people in the face.

The guess is that shooting it down would send a message that giving them money, food, and gas hasn't.

Maybe they could build another one, but wouldn't.

Okay, that's a fair argument. But can we apply expectations for rational actors to Lil' Kim?

Because inducements have worked SOOO well in the past. I say we should juke nuke em!