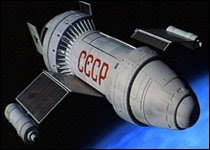 Well, technically not from outer space but low-earth orbit. Foreign policy ran an article this weekend about the collision between a defunct Russian communications satellite and an American commercial satellite (owned by Iridium, who had this to say about the incident) early last week. The whole thing was apparently an accident, even though my intuition tells me that the odds of an un-planned collision like this are incredibly small. Think about it: even if the two satellites are orbiting at the exact same altitude, at 500 miles above sea-level they are on a surface that has more than 250 million square miles to travel in… the odds of them running into each other are astronomically low. Still, I guess the odds are better since the two spacecrafts were traveling along the same longitude. Or, considering that two nuclear submarines collided earlier this month in the Atlantic, maybe those in possession of advanced technologies are just really bad drivers.

Conspiracy theories aside, FP goes on to describe how space is a resource (like oceans, or land) that give those in possession of it certain advantages over those who are not in possession of them. Those who possess communication, spy and military satellites control space, and those who have the ability to shoot down those satellites have the ability to challenge the current hegemons (China has recently demonstrated this ability, and technically Iran as well). All of this will, of course, lead to marvelous new and really cool conflicts in the coming decades (space wars!!!) if satellite-launching countries do not mutually agree to demilitarize space. Noticeably, the current space-hegemon (the United States in case anyone didn’t know that already) has a very long record of refusing to ratify such treaties in the event that we ever develop “Goldeneye” technology (or “Diamonds are Forever” technology for that matter).

The article describes a “nightmare” scenario in which countries start blasting each other’s satellites leaving the earth encircled with a layer of debris that will damage other satellites and eventually prevent any space based communications. This will lead to mass starvations, de-globalization, and a technological return to pre-satellite eras. It also notes that “humane” wars with low collateral damage require precision guided weapons that often require satellites to guide them to their target (or at least find the right target). Without this technology, conflicts will supposedly become more costly.

Sounds like some pretty bad stuff… but the whole thing sounds pretty unlikely to me. I mean, humans are pretty ingenious… I’m pretty sure that if space debris ever were a problem we could develop some kind of anti-debris technology.

Regardless, the article does bring up a very valid point: since space is now required for advanced economic activity, states will increasingly compete with each other for its control. Rising powers on the world stage (Iran, China, India…) will start to deploy their own satellite and anti-satellite technologies in the next few decades. While space-based weaponry is still a long time coming, weapons that use space-based technology may soon proliferate and open up the skies to an unprecedented new type of conflict.
Posted by AR at 3:45 PM

OR we will all be forced to live on spaceships, jumping from planet to planet in search of some habitable/resource rich place. I mean, it can happen.

What's up with everything colliding?