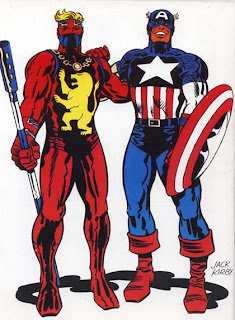 This post is written in response to the article "Britain's Armed Forces: Losing Their Way?" in this week's Economist.

The article emphasizes two main points: 1) Britain's army (conventional ground forces) are undermanned and under supplied and are likely to remain that way for the foreseeable future, and 2) this has led to friction between US and English forces in Iraq and Afghanistan.

As aptly started by a former Bush administration official, there is "a lot of concern on the US side about whether we are going to have an ally with the capability and willingness to be in the fight with us."

Given these developments, what should be America's policy toward our most reliable ally - an ally who might not have sufficient military capabilities to be useful in the future? This is a question that must be addressed now before America is in the heat of battle and only then realizes that its pub brawling partner has turned into a little brother who can't contribute to the fight and must instead be protected. America, the Michael Jordan of the world's military forces, doesn't want to go into battle thinking that Scottie Pippin is in the wings waiting to shoot the trey only to realize that a middle school b-ball beginner stands in his place.

The article details the 2006 counter-insurgency manual developed by American forces which eventually led to the military surge in Iraq. The theme for the manual was "clear-hold-build," and this same strategy should be deploy for strengthening military and political ties between the US and England.

First, American and British forces need to clear away any sour feelings that have arisen because of miscommunication and misunderstood strategies in Iraq and Afghanistan. The article seems to indicate that it is time for American commanders to speak publicly about British failures on these two fronts. But what would this accomplish? There is no need to kick an opponent while he’s down, much less turning from the fight in front of you to hit your partner behind you. The US and England need to better coordinate their military efforts in the future and have clear policy objectives that are understood by both sides, not fight about who did (or didn’t) do what in the past.

Second, I believe that America could incentivize the English to truly place an emphasis on revamping its ground forces by holding out its hand to other allies. If the British feel that America is searching for a new partner, then it will be incentivized to make sure that it doesn’t find one. Britain derives many benefits from being the US’s closest ally (mainly intelligence sharing and nuclear arsenal support) and placing those benefits on the line would make England work harder to secure them. I don’t honestly believe that America would ever cut-and-run on the British in this way, but talk of it might be enough to light a fire under the Union Jack and put it into action.

Finally, America needs to help Britain build (or rebuild) its conventional ground forces. It appears from the article that the English have plans for expanding and improving both naval and air forces, but that the army will receive “less than 10% of all spending on defense equipment between 2003 and 2018.” I’m certainly not advocating that cargo ships begin heading toward England stocked full of M1-A1 tanks marked for delivery to Buckingham Palace, but I do believe that America has a vested interest in making sure that British ground forces are adequately supplied so that they can carry out their supporting role in American offensives. Perhaps America could provide cost-savings information to the Brits or even go into partnerships on the development of new army weaponry which would allow the English to restock at a lower price. I’m open to suggestions on this front.

Some of the views above can seem contradictory, but if mustered in a balanced way, they can be used to ensure that American and Britain continue to have a long, beautiful, and prosperous relationship.

First, I will compliment your use of metaphors.

I'm not sure how I feel, though, about the United States taking on the financial responsibility of rebuilding the UK's ground forces (or UK's basketball team, though this is a different matter...) in the middle of a recession and massive global financial crisis. I know you're not saying that we should be sending tanks to Buckingham Palace (though from what I understand of the British system of government, that probably wouldn't be advisable anyway...), but I still don't know. Something tells me that if the Brown government thought they ought to make beefing up the military a financial priority, they'd do it.