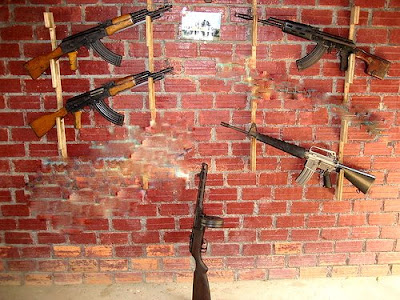 The GAO has recently released a report (GAO-09-366T) stating that the Department of Defense has neglected its duties to keep track of the weapons the U.S. sent (part donations from other countries and part U.S. donations) to the Combined Security Transition Command-Afghanistan (CSTC-A) for the Afghan forces’ use (ANSF). The U.S. contribution was over 242,000 small arms, which were a grab-bag of rifles, pistols, machine guns, grenade launchers, shotguns, RPGs, mortars and others. (you know, the usual) Cost to U.S. (us)? $120 million. In addition, DoD procured about 135,000 arms (value: $103 million) from 21 other countries. Thus, the DoD so graciously “got” over 375,000 small arms to equip the ANSF between 2002 and 2008.

Yet, the GAO found that there were “lapses” in accountability in obtaining, transporting, and storing the weapons. Despite existing Defense protocol to ensure accountability of weapons, such as serial number registration and reports and annual physical inventories of weapons, Defense “failed to provide clear guidance to U.S. personnel regarding what accountability procedures applied when handling weapons obtained for the ANSF” according to the report.

So…just what does a “lapse in accountability” mean? The GAO report tries to simplify with the heading “Defense Could Not Fully Account for Weapons.” In short, the CSTC-A couldn’t tell the GAO investigators the location of over 86,000 of the 242,000 weapons provided by the U.S. Moreover, in regard to the 135,000 weapons procured from our international friends, no reliable records (including serial numbers) were kept. (this explains why your British friends won’t let you borrow their clothes!)

Among the reasons for the poor management of deadly firepower:
-Afghan army and police do not keep equipment accountability books (despite being required by ministerial decree)
-Due to widespread illiteracy in the Afghan population, the capacity to keep such records is very low.
-Many units do not have secure facilities to keep their weapons safe.
-The Afghan forces are unclear as to the policies of property managing because the accountability policy materials were not widely disseminated and anyway, the Afghan property managers often default to the Soviet-style accountability methods.
-Many weapons are POW MIA. Some are taken and resold by Afghan forces (often to the enemy) who need money and others are taken when the forces desert to the opposition forces.

The situation in Afghanistan is a tough one. Up ‘til now we didn’t want to spend too much time or energy there. So, we rounded up a few guns for a few bucks and sent them with good intentions. But, in the end, the lack of any real strategy, plan of attack or foresight in Afghanistan has been illuminated. Due to the lack of diligence on the part of Defense officials (the people who should be the most concerned about issues such as keeping track of where our guns are) over 30% of the weapons sent between 2002 and 2008 are nowhere to be found. No doubt many of them are in the hands of the enemy, as postulated by an article in DefenseNews. Let’s hope the DoD gets its ducks, or should I say RPGs, in a row before the big stuff goes missing too.
Posted by Goose at 4:17 PM