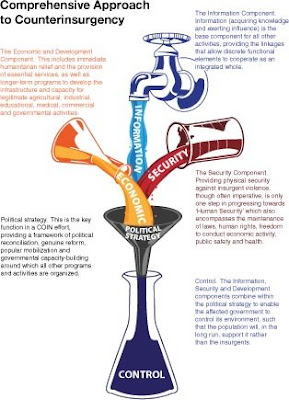 A recent post on Small Wars Journal contained a link to the U.S. Government’s new counterinsurgency guide. The guide, signed on January 13, 2009, serves as a primer for policymakers on the history, policy and practice of insurgency and counterinsurgency.

The doctrine laid out in the document mirrors policy suggested by David Kilcullen (who is credited for his role in creation of the guide), in emphasizing a population-centric approach to combat most insurgencies.

The guide isn’t as specific about tactical and operational details as the Counterinsurgency Field Manual (FM 3-24), but gives more of a general overview of the strategy and requirements for prolonged counterinsurgency campaigns. The guide should help bring policymakers up to speed on theory and components of COIN strategy, the actors involved, and the assessment and planning phases of a COIN operation.

The pdf is visually appealing, with explanatory graphics (see image at right, taken from page 22 of the document) and clear sections divided and organized logically.

The document should be a useful tool in educating policy makers, pundits and the mainstream media about the difficulties and requirements for conducting an operation to win the hearts and minds of a population in hostile territory. Releasing this document in an easy-to-read, visually appealing package is a step in the right direction for building political support for COIN strategy that is a tough sell domestically.
Posted by Thomas Paine at 5:21 PM