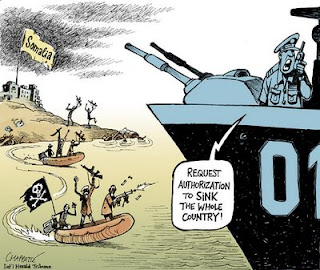 While some of its North African and Middle Eastern neighbors are facing struggles with political uprisings and no-fly zones, Somalia continues to grapple with a different pressing issue: the ever-increasing threat of piracy.

On March 17, government officials in Somalia’s Puntland province voted to suspend a contract with Saracen International, an international private security firm hired in late November 2010 to train anti-pirate forces. According to a New York Times report, Saracen had finished training its first group of 150 militia members by January 2011, and eventually planned to field two 1,000-member antipiracy militias in Puntland and Mogadishu.

While Somalia has struggled with pirates for a while now, the issue is only getting more serious. Instead of trolling close to shore like they used to, pirates are now using hijacked “mother ships” as floating bases and attacking vessels as far as 1,000 miles from land. When the U.S. and other Western powers sent military warships to patrol the Gulf of Aden, pirates shifted their operations to the Indian Ocean and Arabian Sea. According to naval estimates, the newly-expanded “pirate red zone” now includes more than one million square miles of water. As the pirates expand their territory, they’re also getting meaner. Past hostages were usually released unharmed when their ransoms were paid, but recent reports indicate that hostages have been beaten, tortured and even forced to participate in raids. As of February 2011, more than 50 ships and 800 had been taken captive and not yet released.

Somalian piracy isn’t just a domestic issue, either. The Gulf of Aden lies at the heart of one of the world’s most important shipping routes, and is a significant path for Middle Eastern oil delivery to the U.S. and Europe. An inventory of the captive ships features vessels originating in a variety of states, from Thailand to members of the EU. While many of these boats are small fishing craft, the tally also includes supertankers and cargo ships from MNCs. Even civilians are at risk. In February 2011, a group of Somali pirates killed 4 American yachters, and have threatened to murder future hostages if capture is ever imminent.

Could hiring private contractors to handle anti-piracy efforts actually be a viable solution? Key actors like the U.S. and UN would argue “no.” In opposing Somalia’s deal with Saracen, these actors noted that the UN’s 1992 arms embargo on Somalia effectively prohibits the creation of a militia trained and supported by foreign troops. The state already struggles with gun violence, so why introduce yet another armed group that could someday serve as an additional source of conflict?

Transparency and accountability are also big concerns with any private military contractor. As past problems with PMFs like Blackwater have shown us, private American contractors can’t be punished under the Uniform Code of Military Justice, and often slip through the cracks in the civilian legal system. Now, factor in the complications of having a multinational private force working for a company with offices in several countries. If something goes wrong, who exactly takes the blame: individual contractors, their home states, or perhaps one or more of the international firm’s host states? Furthermore, where should transgressors be tried, and by whom? To what legal system should they be held accountable? This issue can become even murkier in the case of a corporation like Saracen, where even the identities of the company’s leadership and state backers are unclear.

Other actors argue strongly in favor of PMFs. Right now, U.S. warships and vessels from at least 20 other countries rotate through the Gulf of Aden on counter-piracy missions as part of Combined Task Force 151, established in January 2009. In light of the current tensions in the Middle East, however, U.S. and other international naval forces in the area may need to be reallocated for other missions, and there are legitimate concerns that the U.S. military is already stretched too thin. A private anti-piracy force could remove some of the burden from U.S. shoulders, and provide trained professionals with the high-tech equipment necessary to do the job right.

Shipping trade associations and insurance companies are two groups that heavily favor the use of PMFs to combat piracy – unsurprising, given average ship ransom fees of $5 million and the significant expense of lost cargo. While some companies have started using private guards on cargo vessels, insurers are concerned about the liability issues of having armed security personnel as part of the crew. Other companies support hiring private convoy forces to protect crew and cargo along their shipping routes, and would finance their use with the funds normally used to pay the extra insurance premiums for travel through pirate red-zones. However, this latter option would also require approval from the ships’ flag states, and neither proposal will benefit ships belonging to civilians or smaller businesses that can’t afford their own contractors.

Private contractors might not be the most popular answer, or even the best long-term solution. Since Somalia’s pirate issues aren’t going away anytime soon, though, PMFs may just be worth at least a second look as a stopgap measure.

Posted by FiveMoreMinutes at 12:30 PM