DADT – Equality or Partial Equality - What will the repercussions be? 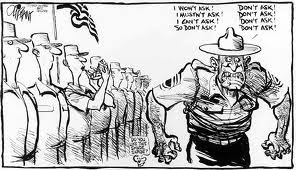 This week, many commands within the Defense Department are beginning the initial implementation phase of the Don’t Ask, Don’t Tell Repeal Act of 2010. Unit commanders are conducting training and engaging in discussions with their troops on this policy. Even though many commanders openly stated their opposition to the repeal of Don’t Ask Don’t Tell (DADT) publicly, they are now taking the appropriate actions to enact this policy change in a timely manner.

For example, in January, the Commandant and Sergeant Major of the Marine Corps released a video to the Corps providing overall guidance while waiting for the final policy decision on the implementation of the DADT repeal. As of March 4, 2011 the Marine Corps provided guidance through MARADMIN 143/11 on the training and reporting instructions to implement the repeal of DADT. Nevertheless, there are still many questions left unanswered and policy guidelines are incomplete.

In the Armed Forces Journal, there is an interesting commentary by L. Michael Allsep Jr., David A. Levy and LT.COL. James E. Parco on reconciling policy change and military culture after the repeal of the DADT. The commentary encompasses all the topics that have been discussed in public debate and discusses the moral and religious arguments for and against the repeal. What is interesting though is that commentaries, such as this one and other discussions on the repeal of DADT, do not take into account the long-term repercussions that will face commanders. Repercussions such as the various family scenarios and questions a commander is faced with that make up the majority of many commanders' daily agendas. These scenarios and questions have yet to be legally addressed within the Department of Defense. For example, if a service member is planning a move from one duty station to another, will a homosexual’s spouse be recognized? Or if a service member is stationed in one state where same sex marriage is recognized, but is given orders to a new duty station where same sex marriage is not recognized, will the service member have a valid complaint when he/she states to a commander that the newly assigned duty station poses a hardship for his/her spouse and their family? Or will homosexual couples receive the same benefits as their heterosexual counterparts?

Training guidelines fail to address these scenarios stating, “There are no changes to the Defense of Marriage Act”, where the Defense of Marriage Act only recognizes marriage as a legal union between a man and a woman. Questions like these are many, but there is little to no discussion in public debate about the repercussions. By failing to fully address legal questions such as these during the debate or failure to incorporate sexual preference as a protected category under Equal Opportunity laws, policy makers have left the “commander” little guidance and assurance to properly address complaints and questions by homosexuals. Homosexuals might still have a valid argument when questioning whether their “openly gay” rights have been recognized or not.

As the authors of the Armed Forces Journal commentary argue, repealing the DADT has reached a monumental step in the integration of a previously “banned” class of Americans, meaning not just gay members, but “openly” gay members. There should be more public debate to understand the reason to put so much emphasis on the legal decision to use the word “openly”. For this would seem to mean that everything about an openly gay’s lifestyle would be granted equal status as a heterosexual service member. However, taking into account scenarios and questions like the before mentioned, the COMPLETE legal path has NOT been cleared to give homosexuals equal status under the law with regard to military service.

The authors also argue that countries such as Australia, Canada, Germany, Israel, the Netherlands and the United Kingdom have integrated homosexuals into their militaries, but again fail to address the culture and laws of those countries when addressing the equal rights of homosexuals in their societies. The United States has equal employment opportunity laws that protect homosexuals, but has yet to take into account whether to recognize same sex marriage. Many of the before mentioned countries have debated this topic on a national level and signed into law same-sex marriage rights. I do not know which came first in these countries; homosexual rights within their defense departments or homosexual rights on a national level, but I find it interesting that the DADT has been repealed and supporters argue that the legal path has been cleared to give homosexuals equal status under the law, but fails to address the equal status of these service members’ marital status and the impact this can have on their families.

I foresee this will be a topic for discussion in the future and it will be interesting if the Department of Defense reveals itself to be the stepping-stone for policy makers in their pursuit of equality for homosexuals in same sex marriage across our country.
Posted by SemperGumbi at 3:23 PM

Will be interesting to see how the repeal of DADT proponents react to this. I predict a slew of new issues that cannot be addressed until the policy takes effect and the headaches for line unit leadership will continue to mount as they deal with them on top of normal combat preparedness issues.