WALL-E at War and in Peace 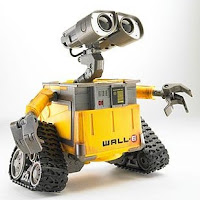 It's the premise of an award-winning children's film: an adorable robot is tasked with cleaning up a toxic mess created by humans and making the area safe for their return. After a few close calls, the robot ends up saving the world. In the process, it teaches the humans about friendship, the responsible use of technology and the merits of a catchy soundtrack.

Now, picture that robot in Japan, then add “defusing bombs” and “firing electric machine guns” to its list of hobbies.

Earlier this week, the iRobot corporation dispatched four robots to aid Japan’s relief workers, who are struggling to manage the fallout from the March 11th earthquake and tsunami and the ensuing reactor meltdowns at the Fukushima Daiichi nuclear power plant. While the exact role of these robots hasn’t yet been determined, they’ll most likely be used in the Fukushima plant’s cleanup efforts, performing tasks like handling radioactive materials and delivering water to overheated nuclear fuel rods.

Of the four iRobots sent to Japan, two of them are the PackBot model used by many of the U.S. military’s EOD teams in Iraq and Afghanistan. Along with the cameras included with each standard PackBot, one robot now contains a sensor to detect radiation levels at the plant. The other two robots, a pair of new 710 Warriors, have each been specially equipped with a robotic arm strong enough to move a fire hose. Since they can climb stairs and lift objects, all four robots could be useful for inspecting barrels or other containers near the reactors and taking samples to check radiation levels in and around the plant.

iRobots aren’t the only military assets in Japan with their eye on the problem. On March 17, Pentagon spokesman Col. David Lapan confirmed that a Global Hawk drone has flown several missions to survey damage at the Fukushima complex and other areas heavily affected by the disasters. Data and images from the flights have been shared with the Japanese government to help with relief efforts.

The robots’ visit to Japan isn’t the first time that military robots have made the jump to relief work, either. Before they ever went to war, PackBots were used to search through the rubble of the World Trade Center after the 9/11 attacks. When Haiti was shaken by its own catastrophic earthquake in January 2010, a Global Hawk drone flew damage-assessment missions and shared high-resolution images with first-responders. In May 2010, iRobot’s unmanned underwater Seaglider was released into the Gulf of Mexico to monitor ocean currents, water temperature, and dispersed oil droplets in the wake of the BP oil spill.

Given the increasing overlap between DOD and State Department roles, it shouldn’t be a surprise to see wartime robots on peaceful missions. In a 2007 report to Congress, the State Department welcomed a more permanent role for the DOD in many development activities, arguing that the military can “provide a flexible, timely, and effective whole-of-government approach to today’s security environment that is well coordinated in the interagency [coordination process], both in Washington at the policy level and in the field at the operational level.” With a public FY11 operating budget of approximately $718.8 billion and an arsenal of cutting-edge technology at its disposal, the DOD has financial and physical resources that the State Department and its $53.8 billion FY11 budget just can’t match. Why not use them to help out a domestic region or a foreign ally in need?

As our robots take to the skies and disaster sites of Japan, though, it’s important to acknowledge the ambiguity that using military assets for social projects can create. While the Global Hawk data is an asset to Japanese nuclear and reconstruction teams right now, will the Japanese government later regret giving a sophisticated U.S. surveillance plane such a high level of access to its airspace and reactor facility? Despite its use for a more humanitarian mission, the Global Hawk is ultimately a military drone designed for target surveillance, and there’s nothing preventing the U.S. from using the “humanitarian surveillance” data for our own benefit later on. On the other side, will the U.S. regret sharing so much information on and access to the drone’s capabilities?

Similar questions exist for the land-bound iRobots, especially the easily-weaponized Warrior bot. If robots primarily associated with warfare pop up on aid missions, they may raise concerns about covert data collection or other dual-use worries. Worse, they may serve as targets for conspiracy-minded groups that see them as evidence of a U.S. military intervention, making an already-unstable environment even more unsafe. Finally, shared access to U.S. equipment only raises the likelihood of copycat technology, which should and will affect what we share, and with whom.

While disaster-management missions can be worthy ones for U.S. military robots, we can’t forget that our lovable WALL-Es are still related to the weaponized "Small Soldiers." That’s a pretty tricky film soundtrack to write.

Posted by FiveMoreMinutes at 11:29 AM