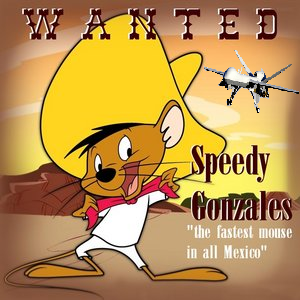 Well, they did it. No, not the UN's approval of a no-fly zone over Libya. No, not UK's close win over Princeton. I'm talking U.S. drones in Mexico.

This is an interesting development in U.S. involvement in the drug war south of the border. Since President Calderón declared war on the drug cartels, over 30,000 people have died in Mexico. The United States has tried to cooperate with the Mexican government in various ways, but has typically been stopped short of methods that hinted toward military involvement (as opposed to police or border security operations). Understandably, the Mexican government does not want to appeal to U.S. military forces for fear of weakening its sovereignty and in effect inviting the label of "failed state" to its country.

Despite the perceived stigma of U.S. involvement, the security issue in Mexico has reached the point that many officials on both sides of the border have begun terming the violence and lawlessness as symptoms of an insurgency. In the New York Times article, a "senior American administration official had this to say of President Calderón: "He's not really a fan of the United States, but he knows he needs their help, so he's willing to push the political boundaries."

Assuming that the drones are effective in their information-gathering runs over the drug cartels, will this escalate U.S. involvement in Mexico? Is there ever a chance of the drones being armed? Does the very use of drones further legitimize the labeling of the drug cartels as an insurgent threat?