Iraqi SOF: Under the Radar but on Point 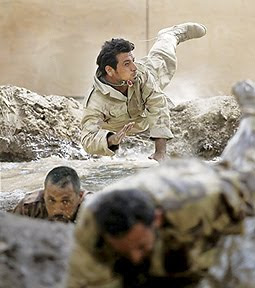 Much has been made about the controversial tactics of US SOF operations in the War on Terror but one of their core competencies and greatest contributions to American strategic capabilities seems to have gone unnoticed internationally. In small training bases in Jordan in 2003, U.S. and Jordanian SF began the task of transforming young Iraqis into soldiers with unconventional capabilities.
Iraq has long possessed Special Operations units but, much like the purging of the Iraqi Army itself, it was disbanded due to its Sunni/Saddam loyalty. The goal was to forge the 1st Iraqi Special Operations Brigade (ISOF) of over 4,100 soldiers with US equipment, training, and tactics thus making interoperability feasible. ISOF recruits from all sects throughout Iraq but is beholden to no one except the Office of the Prime Minister by executive order issued by PM Maliki in 2006. ISOF operates with US advisers even to this day and have participated in nearly every large military operation since Fallujah in 2004.
The US SOF and partner units, such as Columbian and Salvadorian commandoes (also US trained and equipped), sing high praises of the ISOF and the respect is certainly mutual. Successful counterinsurgency operations require competent counter terror capabilities as well and that is exactly what ISOF has provided in greater amounts as each year passes.
But, much like the distrust among some US military and civilians of our own SOF community, many Iraqis shutter at the mention of ISOF. The memories of Saddam’s secret police surely come to mind when one describes a secretive, competent unit unchecked by the Ministry of Defense who reports solely to one political office. It is exactly this distrust that our own Inspector General found to be among the greatest setbacks for ISOF’s sustainability.
Reports of civilian abuses by the “dirty brigade” as they are known in Sadr City grew rapidly during offensive operations in 2008. Even mentioning the word Diyala (Iraqi Province previously controlled by insurgents for periods throughout OIF) in the presence of ISOF operators will get you cut off by their American advisors. ISOF is very close now to operating without any advisors whatsoever as the Status of Forces Agreement continues to decrease the American troop presence in Iraq. While 5th Special Forces Group (regional focus is the Middle East) will continue their partnership indefinitely, ISOF must gain trust on its own. Although a quick reaction force is necessary for any government, I would recommend that the current command and control structure of ISOF be reviewed. The Iraqi government has come a long way towards gaining the confidence of its people and it is counterproductive for one its greatest assets for providing security to be controlled by one political office that invokes the terrors of the past.
Posted by Operation Wrath of God at 3:17 PM