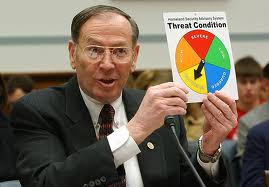 Typically, springtime brings the much-anticipated return of color: blooming flowers, blue skies, and those awkward pre-summer sunburns from afternoons at Keeneland. Thanks to the Department of Homeland Security, though, the U.S. terror level is about to get a lot less colorful this spring.

Earlier this week, DHS Secretary Napolitano officially bid adieu to color-coded terrorist threat levels, the often-mocked system that confused the nation (or at least deprived it of exposure to the cool-color palette) for the past ten years. Its successor, the National Terror Advisory System (NTAS), will be operational as of Tuesday, April 26.

Instead of keeping the U.S. on a constant but vague state of alert, NTAS only issues a warning based on specific and credible information. The most severe alert, an imminent threat alert, warns of “a credible, specific, and impending threat” against the United States, while the less extreme elevated threat alert warns of “a credible terrorist threat.” Unlike the former terror alerts, these warnings are only issued for a specified time frame, and will expire unless renewed.

The new system will also be more effective at reaching its intended audience. Many NTAS alerts will only be sent to members of law enforcement or to areas that are directly affected by a particular threat, while others will be shared more broadly. These will be available through public media outlets and a new section of the DHS website, and will also be sent to anyone who registers for updates via Twitter, Facebook or Email. Website developers even have the option of including NTAS RSS feeds and widgets on their pages.

NTAS’s most significant advancements, as well as its potential to succeed where the color-code system failed, lie in its more interactive relationship with the civilian population. Along with the assignation of an “imminent” or “elevated” label, new terror alerts will include guidance on how citizens can prevent or lessen the danger, and how they can protect themselves in the event of a particular emergency. The nationwide “See Something, Say Something” campaign is intended as both a watchdog and feedback mechanism, encouraging concerned citizens to share information on possible threats or suspicious people with their local authorities.

The improved transparency and outreach arms of the NTAS system are a welcome change from the murky color-based model. If it weren’t for the fact that threat levels generally sat at “yellow,” reaching “orange” status five times and “red” status only once, the majority of Americans would have had difficulty naming the day’s alert states under the old system. Even if they could, how many of them could explain why the present level was chosen, beyond referencing the general threat of terrorism? By providing more details on the situation at hand and making that information more easily accessible, DHS makes it easier for average Americans to stay informed about national security news, and to better prepare themselves in the event of a crisis.

The NTAS system is also a welcome antidote to a system that seemed to forever place the U.S. on the brink of disaster. After nearly ten years at the yellow “elevated” threat level, any initial power that the ratings system may have once wielded had long diminished by the time its retirement was first announced in January 2011. By drawing attention to specific threats as they occur, instead of classifying every day as “a day to worry,” DHS increases the likelihood that announcements under their new system will be taken more seriously. Time will tell whether the new NTAS plan will be more effective, but springtime won’t be any less bright without NTAS's rainbow-hued predecessor in the meantime.

Posted by FiveMoreMinutes at 2:36 AM