As many expect, armed conflict has intensified over the petroleum industry between Sudan and South Sudan. The Comprehensive Peace Agreement (CPA), completed in 2005, was supposed to end hostilities, develop a way to share profits from the oil industry, and establish democratic institutions throughout the country. The agreement was signed by the Sudanese government and the Sudan People’s Liberation Movement. Nevertheless, it did not take long for conflict to ensure within the newly founded government of national unity. In 2007, for a couple of months, the Sudan People’s Liberation Movement (SPLM) removed itself from the established government due to failure of the government to implement aspects of the CPA. While the SPLM reintegrated itself into the government, it was clear that tensions between the national government and SPLM remained. South Sudan held a referendum on declaring South Sudan as an independent state. The referendum passed almost unanimously and the new nation began July 9, 2011.

The split of the state brought to light one of the most important questions. How would the separation of resource wealth and the exploitation of oil resources be divided between the two states? Geographically the majority of the oil fields exist within the territory of South Sudan. However, the north has factors crucial to the petroleum industry as well. The territory’s refineries, export port on the Red Sea, and the pipeline exist in the territory of Sudan. Even at the time of South Sudan’s independence, it had not been agreed upon how the petroleum industry would be divided or how the profits would be handled. 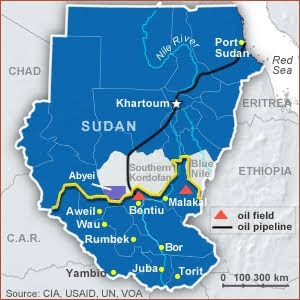 The map details the disputed territorial areas in gray and purple as well as the geographic locations of two of the major aspects of the oil industry (the fields and pipeline).

This map highlights more in depth the territorial division of the oil industry between the two states. The area of conflict can be located on this map and a comparison of the two maps will allow for a comprehensive outlook on the oil industry and the disputed territories.

South Sudanese forces focused on the issue of division of petroleum revenues and the conflicts over attempts to delineate clear borders with their actions in regard to the Heglig oil fields. Earlier this week, the army seized the area and what resulted has been called limited war which is projected to persist sporadically indefinitely. The armed conflict between the two states’ armies began as troops from Sudan’s army moved to retake the occupied area. There have been two days of direct armed conflict, including bombing from Sudanese aircraft.

Some have called this fighting “limited”, but there are others who believe that this may be the spark to yet another war. The latter is most probable, unless there are exemplary negotiations that occur the conflict is sure to escalate. The escalation of this conflict will not only mean rises in the already high death toll, but also disruption in the states’ petroleum industry hampering the economic, social, and political development.